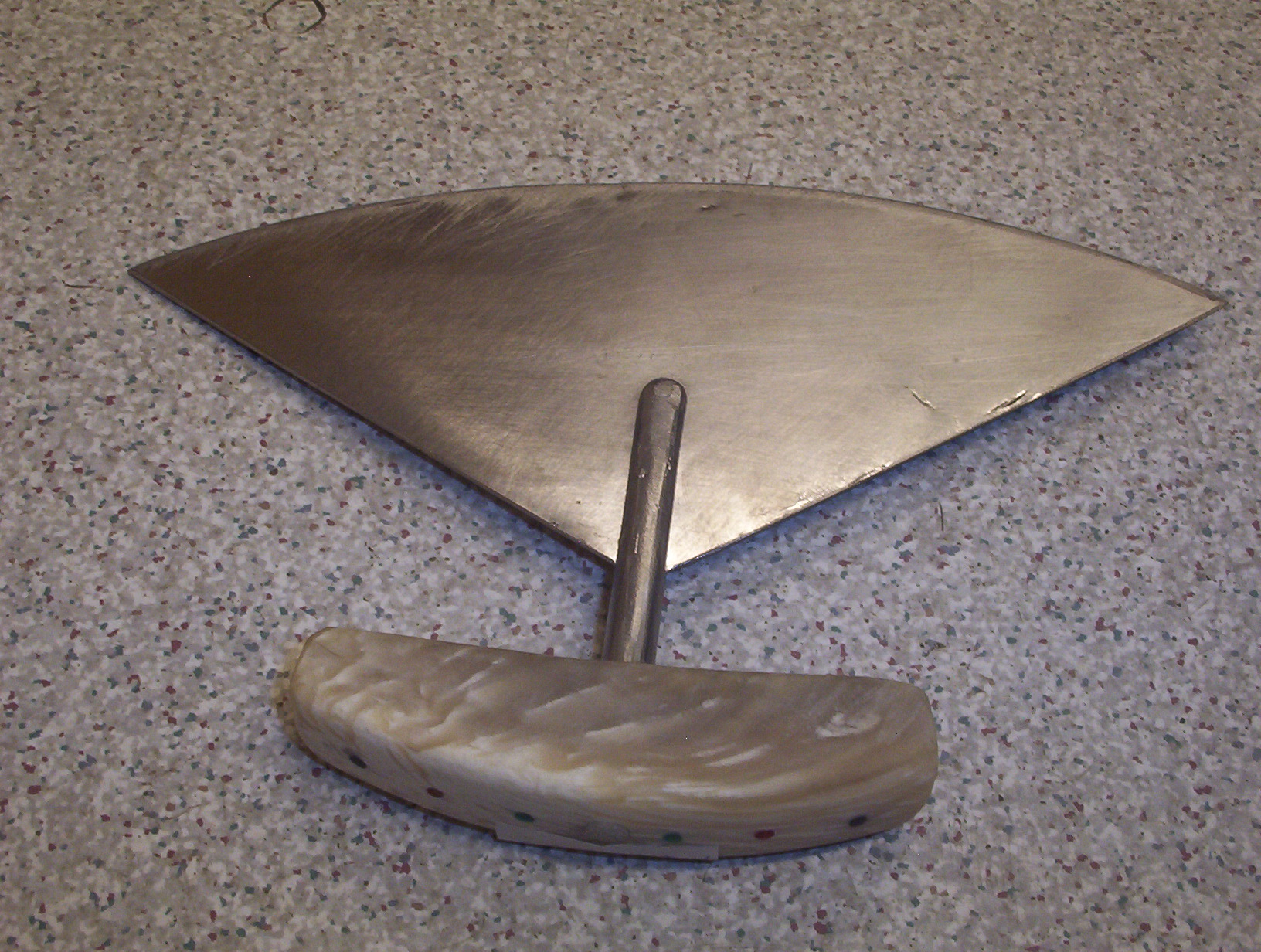 An ulu is a type of knife used by Arctic Indigenous peoples. Designs vary depending on the region of origin. This ulu is in the Western Arctic style.

An ulu is a type of knife used by the Inuit. (See alsoArctic Indigenous peoples.) In Inuktitut, ulu (ᐅᓗ) means “woman’s knife,” reflecting the historic use of the tool by female Inuit . Women used ulus for various domestic tasks, including food preparation and the separating of animal skins to ready them for the manufacturing of clothes. Some Inuit women continue to use ulus for these purposes. Historically, men used different types of knives and tools while hunting and fishing. Though the ulu still retains traditional significance as a woman’s knife, the object is also largely considered an important part of Inuit culture more broadly.

A prominent feature of ulus is their distinctive, thin, crescent-shaped blades attached to a sturdy handle. Today, ulu blades are usually made of steel; the handles, of wood. The length and shape of blades and handles vary depending on the community.

Historically, ulu blades were made from stone varieties — often slate, shale or quartzite — and handles were crafted from bone, ivory or wood. Just like today, ulus ranged slightly in physical and material form. While conducting research in Cumberland Sound in the 1880s, anthropologist Franz Boas noted that the Baffin Island Inuit used an adhesive made from clay, dog hair and seal blood to adhere ulu blades to a handle. In the 1890s, some western Inuit fashioned blades by using rawhide, whalebone and pine root to sew them together through a common hole in the blade and handle. The Inuinnait (Copper Inuit) were known to construct their blades from copper that they mined in present-day Nunavut and the Northwest Territories.

As relics of traditional lifestyles, ulus are used by some Inuit to reclaim cultural practices eroded by colonization. Inuk cook Rebecca Veevee, for example, primarily used the ulu on her cooking show Niqitsiat (Healthy Food), which aired from 2009 to 2018 on the Inuit Broadcasting Corporation and Aboriginal Peoples Television Network. As a means of promoting Inuit traditions in a modern world, Veevee encouraged guest cooks to use the ulu as well.

Ulus also hold special importance to Inuit women. Consequently, an Inuk woman might use the same ulu for many years, sometimes her entire adult life. This object could include ornate drawings and engravings on the handles that are specific in meaning to the woman’s personal and cultural identity. Inuit rights activist Shelia Watt-Cloutier has noted than when an Inuk woman dies, her ulu retains her energy, making ulus powerful spiritual objects. (See also Rights of Indigenous Peoples in Canada.)

Today, ulus are also used for symbolic purposes. At the Arctic Winter Games, gold, silver and bronze ulus are presented to athletes. In 2009, a ceremonial ulu was presented to the first graduates of the Master of Education program in Nunavut, offered jointly by the University of Prince Edward Island, Nunavut’s Department of Education, St. Francis Xavier University and Nunavut Arctic College.