Jules-Paul Tardivel, journalist, novelist (1851-1905). Until his death he devoted himself to his two lifelong obsessions: ultramontanism and nationalism. 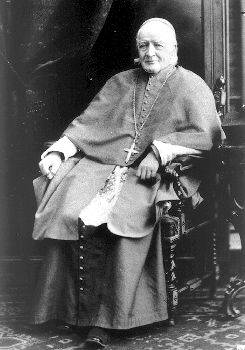 In Canada and in Europe — mainly in France, where ultramontanism appeared during the Middle Ages and grew rapidly during the French Revolution —, its supporters criticized the separation of Church and state, as well as what they considered manifestations of modern liberalism. They pushed for the supremacy of the Catholic Church in both civil and religious matters. This school of thought was mainly characterized by its attachment to the Holy See’s authority and, as of 1870, by its faith in the Pope’s infallibility. The term “ultramontane” meant, literally, “beyond the mountains,” because the French Ultramontanes believed in the supremacy of the Vatican — which is located beyond the mountains of the Alps — over the local clergy.

Ultramontanism was adopted in Canada in the 1820s, first in the Saint-Hyacinthe seminary under the strong influence of French priest Félicité de Lamennais, then in Montreal under that of its first Catholic bishop, Jean-Jacques Lartigue. The latter opposed the Gallican ideas and fought for the freedom of the Church and for religious supremacy in matters of education. His successor, Monseigneur Ignace Bourget, led the triumph of ultramontane ideas in all fields (theology, education, relations between Church and state, etc.) in Montreal and made them a major, albeit contested, part of the Catholic world in Canada.

Ultramontanism grew strong in Canada, but faced a split at the end of the 1860s, following the Guibord Affair. Monseigneur Bourget, followed by Monseigneur Louis-François Laflèche, represented a group of extreme Ultramontanes who were more active within political institutions. This group fought for the immediate application of ultramontane principles, namely the Church’s supreme power over education matters, the reform of laws under canon law and the introduction of episcopate monitoring of civil legislation. Moderate Ultramontanes, like Joseph-Sabin Raymond, to whom the extremists referred as liberals, wished for a more prudent application of the Ultramontane principles and for compromise where necessary.

The extremists engaged conservative journalists and politicians, who advocated for a Catholic election platform as early as 1871 with the goal of guaranteeing the supremacy of the Church over politics. Over the following years, the extremists and supporters of the election platform led an anti-liberal crusade, which resulted in the creation of the Castors (“Beavers”) in 1882.

Ultramontanism dominated philosophy and theology teachings in small and large seminaries, the social doctrine of the Roman Catholic Church in Canada and several bishop directives from the second half of the 19th century until the 1950s.

Ultramontanist thought guided the ideals of important French Canadian nationalists who desired a self-sufficient society governed by the Church. The movement had a significant influence over the French-Canadian society and Maurice Duplessis’ reign as premier of Quebec. Ultramontanism fed traditional and conservative tendencies within the French-Canadian society, until the Quiet Revolution and the Second Vatican Council put an end to this influence.