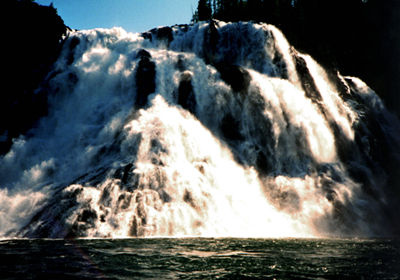 Tumbler Ridge is surrounded by the foothills of the Rocky Mountains, and 2 largely undeveloped provincial parks, Monkman and Gwillim Lake, are close to the town. Kinuseo Falls in Monkman Provincial Park rivals Niagara Falls in height. The name Tumbler Ridge refers to a ridge north of the community on which there are numerous rockslides.

In the 1970s large reserves of coal were found in the area. Tumbler Ridge was developed by the BC government in the early 1980s as a resource town to house the employees of 2 large coal companies, Quintette Coal Ltd and Bullmoose Operating Corporation. This coal supplied the Japanese steel industry. The community was dealt a severe blow in 2000 with the closing of the Quintette mine. Low prices and less demand for its coal were the main reasons for the closure. The Bullmoose mine completed its project lifespan and closed in 2003. Tumbler Ridge has 3 new operating coal mines and has been supplying coal to international markets again since November 2005. The community is pursuing economic diversification in the forestry, petroleum and tourism sectors. The discovery of a dinosaur trackway in 2000 has led to the unearthing of numerous fossil and bone deposits in the area.