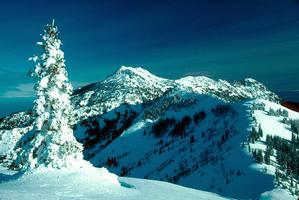 The treeline marks the limit of trees latitudinally on continental plains and altitudinally on highlands and mountains (where it is sometimes called the timberline). Tree species still occur beyond this limit, but in shrub form, extending to the "tree-species line."

The treeline is controlled by climate in interaction with soil. In the North, it is correlated generally with the modal (most common) position of the southern edge of the arctic front in summer, and with such temperature indices as the July 10°C isotherm. But wherever soils are deeper and warmer than normal, as in river valleys (eg, the Thelon) or on upland, sandy eskers, ribbons of trees extend the treeline far into the tundra.

Trees of the Treeline
Characteristic treeline species are alpine fir, whitebark pine and alpine larch in the Rocky Mountains; in Alaska and northern Canada, co-existing black spruce, white spruce and larch. Similar species of spruce and larch, with pine and birch, continue the circumpolar treeline across Eurasia.

Non-static Limit
The pollen record (see palynology) and preserved wood show that treelines on this continent have fluctuated greatly in the past, advancing hundreds of kilometres during warm phases and retreating southward when the climate has deteriorated. Three major movements have been identified; the first during the Tertiary (65 to 1.65 million years ago), reaching Ellesmere Island; later in the Pleistocene (1.65 million to 10 000 years ago), reaching northernmost Greenland and Meighen and Banks islands; and most recently in the early Holocene (some 10 000 years ago), reaching the Mackenzie Valley and Tuktoyaktuk, NWT. Such movements take hundreds of years.

Climatic changes can cause abrupt shifts in the treeline, because seed production and survival of seedlings are precarious near the limit of trees. The conifers are also susceptible to fire during dry periods, and this and cutting by humans make today's treeline a diffuse and unstable boundary. The dotted lines and the label "Approximate Limit of Trees" that indicate the treeline on northern National Topographic Survey maps are appropriately vague, partly because of a lack of field surveys.