The Toronto Islands, 332 ha, are an archipelago of 15 islands in Lake Ontario about 1.6 km south of downtown Toronto. They were known to the Mississauga as "the place of trees standing out of the water." This car-free area was originally a peninsula, popularly described as an island in defiance of geography. It was made up of eroded sand and gravel carried west from the Scarborough Bluffs. Separation from the mainland occurred in 1858 during a violent storm. From an area of about 145 ha in 1870, they have more than doubled in size. Winds, currents, dredging and landfill operations have helped shape the islands, curving them into an 8 km hook broken on the inside into tiny lagoons and islets. The 8 largest islands are Centre, Muggs, Donut, Forestry, Olympic, South, Snake and Algonquin. Centre Island, with its amusement park, beaches and gardens, attracts one million visitors a year. Toronto City Centre Airport forms the northwest area of Hanlan's Point. 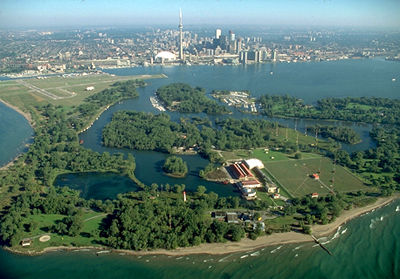 The Toronto Islands were once a peninsula formed of sand eroded from the Scarborough Bluffs (courtesy Canadian Tourism Commission).

Lieutenant-Governor Simcoe who picnicked, hiked and went horseback riding on the islands in 1793, decided to make York [Toronto] the naval and military centre of Upper Canada, with Gibraltar Point (now Hanlan's Point) guarding Toronto harbour. In 1813, however, American soldiers landed and destroyed fortifications on the islands. A residential community for over 150 years, Ward's Island, at the eastern edge of the archipelago, was named after fisherman David Ward who settled there with his family in 1834. The Ward's Island community is linked by bridge to that on Algonquin Island, and together their residential population occupies 250 homes, owned by islanders on land leased from Metro Toronto. In the early 1950s, 8000 people lived on Centre Island, but its elegant summer resort hotels, theatres and stores were demolished in the late 1950s and 1960s to make room for parkland. Since 1956 the remaining residents have struggled to save their homes. In 1981 the Government of Ontario passed legislation ensuring that the community will continue to exist at least until 2005.