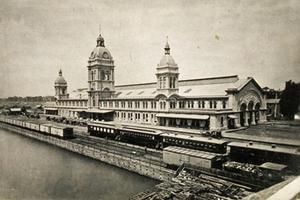 The second Union Station opened on 1 July 1873. At the time it was the most lavish train station ever built in Canada (courtesy Toronto Reference Library/T-12192). 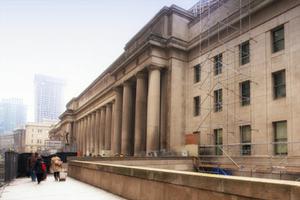 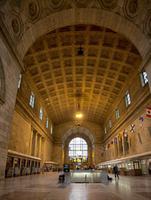 The impressive atrium of Union Station; much of the rest of the station is undergoing redesign in 2012 (photo 2012 by James Marsh).
PreviousNext

On 6 Aug 1927, a large and excited crowd gathered on Front Street before the columned porticos of Toronto Union Station. This beautiful Beaux Arts structure was the largest railway station ever built in Canada. Under construction since 1915, much of the new station was completed by 1920, but it did not open to the public for another 7 years when the approach tracks were finally laid.

On this bright summer Saturday, His Royal Highness, Edward, the Prince of Wales was in his private train steaming towards Union Station. At precisely 10:30 a.m., the train came to a stop and the prince descended onto the platform to be greeted by politicians and officials. After a brisk walkabout through the new station that lasted less than 10 minutes, Prince Edward used a pair of gold scissors to cut the ribbon that declared the station open. Stepping out onto Front Street, he was greeted by an adoring public and climbed into an automobile that whisked him off to City Hall. One newspaper commented that there was one minute of pomp for every year of construction.

Nine years later, the prince ascended the throne as King Edward VIII, before abdicating in 1936 in favour of his younger brother who became King George VI. He too would briefly pass through Toronto Union Station on 22 May 1939, on the first visit of a reigning monarch to Canada.