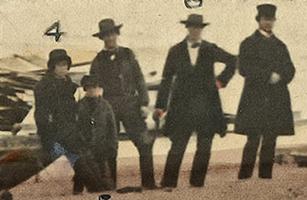 On the night of Friday, 4 December 1868, a terrible blizzard blew up on Lake Ontario. The schooner Jane Anne Marsh went aground on Toronto Island, west of the Gap, in a snowstorm so foul that no one even knew about her until the next morning, when debris washed ashore. The crew would have been lost but for the remarkable endurance and courage of William Ward and Robert Berry, who made themselves legendary that day.

Islanders tied lifelines around Ward and Berry and they manned a skiff. They capsized three times, saved by the lines each time, before they reached the schooner. The boat had run aground, five of the crew had taken shelter in the partially submerged cabin, and the captain and one crewman had climbed the mast to survive. They were covered in ice and frozen to the mast, so Ward and Berry each took a piece of cordwood and pounded the ice from them.

The skiff could take only two men at a time, so Ward and Berry had to return again and again. With each trip, island women took charge of the survivors, men broke ice off the skiff, and Ward and Berry ran circles in the snow to bring their circulation back. The rescue took seven hours. All the crew members survived.

In the course of his life, William Ward would save 164 people from Toronto Harbour.