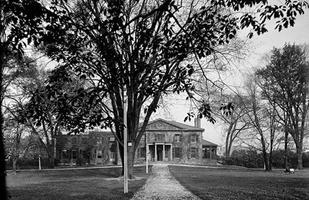 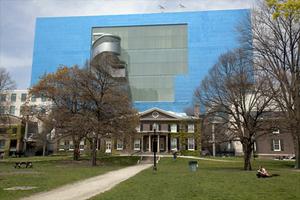 Frank Gehry's blue titanium south façade of the Art Gallery of Ontario forms an impressive backdrop for The Grange, 2012 (photo 2012 by James Marsh).

The Grange is a magnificent Georgian manor that is now a part of the Art Gallery of Ontario. Once the home of the powerful Boulton family (see Henry John Boulton), it was bequeathed to the city as the original Art Museum of Toronto at the death of its most famous--or infamous--resident, Goldwin Smith, the "sage of the Grange."

The manor was built in 1817 for D'Arcy Boulton Jr, who left it to his son, Toronto mayor William Henry Boulton. When William married Harriet Dixon, the house was put in her name as a marriage settlement. William died in 1874 and in 1875 Harriet remarried, this time to Goldwin Smith, scholar and political writer.

Smith became Canada's pre-eminent man of letters, and he voiced his often-controversial opinions on all manner of subjects in his own publications and in international journals. He called himself a classical liberal, with strong opinions in favour of unfettered capitalism, separation of church and state, and anti-colonialism. He believed in the inherent superiority of the British "race" and its civilization.

He opposed women's suffrage and higher education for women, advocated British rule in India despite his anti-colonialism, proposed the union of the United States and Canada, and was a determined anti-Semite (see anti-Semitism) although he contributed to the building of Toronto's Holy Blossom Temple.

Smith died in 1910, only a few months after Harriet. As they had agreed, their home became the Art Museum of Toronto.