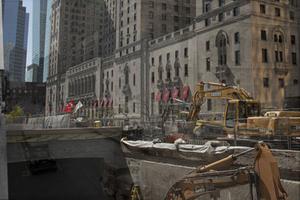 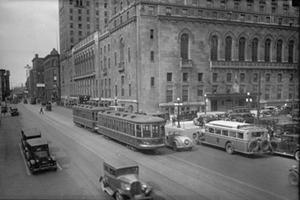 royal york hotel, circa 1928, rising like a pyramid in downtown toronto (from Toronto: Then & Now by Mike Filey).
PreviousNext

"Unparalleled Opulence at the Royal York"

One of the most glittering social events in Toronto's history occurred on 11 June 1929, when the Canadian Pacific Railway's Royal York Hotel was officially opened by Lord Willingdon, the Governor General of Canada. For much of the 20th century, the massive stone building would define Toronto's skyline, and shape the city's image of itself.

Although the railways had built many hotels across Canada, this was the grandest edifice in what was then Canada's second-largest metropolis. It replaced the stately Queen's Hotel, which had stood on the site in various iterations under different names since 1843, and was named for Lieutenant-Governor John Graves Simcoe's original designation for Toronto, the "Royal Town of York."

The hotel was co-designed by the architecture firm of Ross & Macdonald, which was also involved with the new Union Station across the road. With 1048 rooms on 28 storeys, the Royal York was the largest hotel in the British Empire, and became known as a city within a city. Its opulence was previously unknown in Canada. It housed 10 ornate passenger elevators, a 12 000-book library and its own 12-bed hospital. It also featured a concert hall, a glass-enclosed roof garden, the largest hotel kitchen in Canada, a 35-operator switchboard, its own bank and a golf course.

The Royal York was the tallest building in Toronto until 1931, when the Bank of Commerce building opened. In the 1950s, when the hotel's status was threatened by rival Canadian National Railway's Queen Elizabeth Hotel in Montreal, Canadian Pacific promptly built a 400-room extension onto the east side.