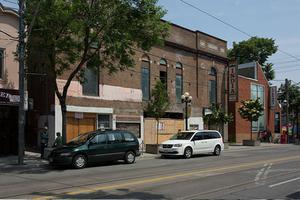 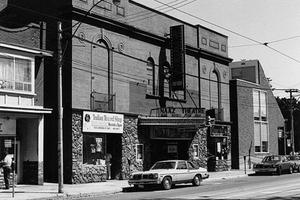 "Bollywood at the Naaz Theatre"

On any given evening in the 1970s, the line-up could stretch around the block. Movie-goers representing the full diversity of the city's South Asian community came from across the Greater Toronto Area and from as far away as Montreal or Niagara - to experience North America's first Bollywood cinema, the Naaz Theatre at Gerard Street East and Ashdale Avenue.

For just a $3.50 ticket, customers could enjoy a plate of channa masala or bhatura before watching the latest Bollywood blockbuster. For recent arrivals, the theatre helped relieve their homesickness and connected them with the contemporary scene in India. Gian Naz (sometimes spelled Naaz), a mechanical engineer by training, immigrated to Toronto with his wife and children in 1968. He worked at a variety of jobs before taking over the abandoned Eastwood Theatre in 1972 in a working-class neighbourhood with few, if any, South Asian residents. Although not an immediate success, his cinema quickly became a cultural hub for a growing community. Soon Indian restaurants of every regional variety, specialty groceries, retail stores and similar businesses gravitated to the block.

Although the Naz family closed their theatre in the mid-1980s, hurt by video rentals and competition in the suburbs, the Gerrard Indian Bazaar neighbourhood it fostered remains vibrant today.