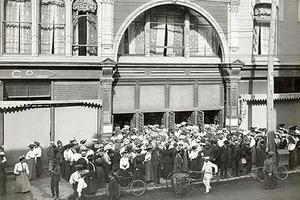 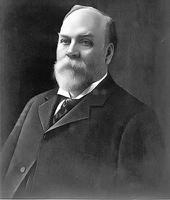 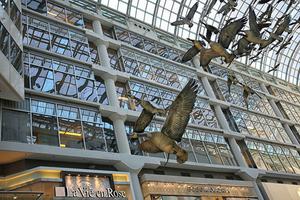 Atrium of the Eaton Centre (photo 2012 by James Marsh).
PreviousNext

In the mid-1960s, Eaton's announced plans for a massive office and shopping complex that would demolish virtually every building in the area bounded by Yonge, Bay, Queen and Dundas - regardless of its historical importance. Eaton's had been, along with Simpson's, the heart of downtown shopping since Timothy Eaton built his imposing retail store on Yonge Street in the 1880s. With innovations such as money-back guarantees, restaurants, parcel checks, free bus service from train and boat stations, a Christmas parade and a mail-order service using catalogues, Eaton's continued to dominate the department store business in Toronto, and across Canada, through the 20th century.

On a far grander scale than its predecessor, the demolished Toronto Arcade, the interior design of the Eaton Centre was considered revolutionary and influenced shopping centre architecture throughout North America. The success of the Centre did not save Eaton's from bankruptcy, though the name survives. Today, the Eaton Centre is one of Canada's top shopping destinations, and with a million visitors a week is Toronto's most popular tourist attraction.

One of the most celebrated sights in the Eaton Centre is a sculpture featuring a group of fibreglass Canada geese hanging from the ceiling. The sculpture, called Flight Stop, is the work of artist Michael Snow.