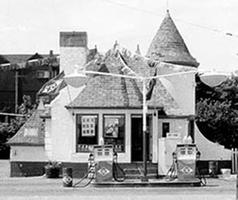 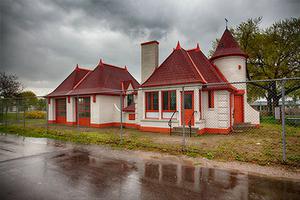 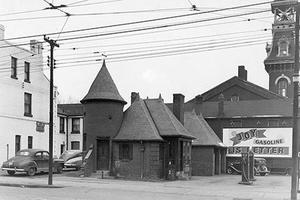 "A Whimsical Fill-up at Joy Oil"

There was a time when gasoline station design went beyond a collection of pumps under a plastic canopy. Back in the 1930s, Joy Oil modelled its stations on French chateaus, in miniature, providing an aura of whimsy while motorists filled their tanks. Fourteen once dotted Toronto's landscape, but only the renovated mini-castle sitting behind a fence in Sir Casimir Gzowski Park remains.

Launched in Detroit by Charles and Margaret Austin as the Sunny Service Oil Company in 1928, the firm changed its name to Joy Oil in 1936, the same year it entered the Toronto market. Thanks to cheap crude purchased in Texas and Romania, Joy Oil sold its gas for a few cents less per gallon than its competitors. For that, it became locked in battle (and lawsuits) with larger gas companies. In keeping with its architecture, it used images from the film Snow White and the Seven Dwarves (1937) to advertise itself as the little guy fighting the big trusts, all for the sake of the customer.

Though Joy Oil ceased operations in the 1950s, its castles remained, but dwindled in number until only the station at the northwest corner of Lake Shore Boulevard and Windermere Avenue remained. The city purchased the station, moved it across the road, and renovated it between 2006 and 2008. Despite proposals ranging from food service to a bike rental shop, the castle waits for a new purpose.