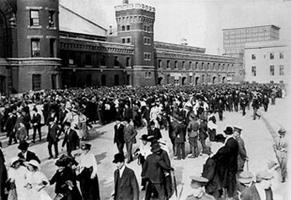 Crowds at the Toronto Armouries when the first soldiers left for overseas duty during the First World War (courtesy City of Toronto Archives/Fonds 1244, Item 766B). 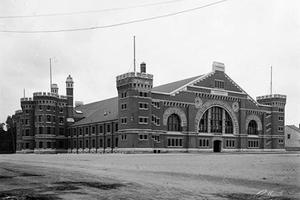 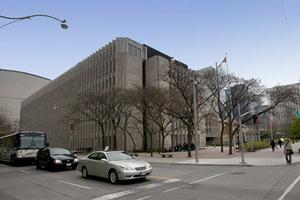 For years Toronto's soldiers trained in sheds scattered all over the city. With the building of the Toronto Armouries, completed in 1894, they had the most impressive place to muster in North America.

The federal Department of Public Works realized that they needed to provide their volunteer soldiers with centralized locations for training and built a series of impressive armouries across Canada. Thomas Fuller, the chief architect of the Dominion, designed these towered and castellated edifices to express their military purpose in massive forms. They were at the time the largest armouries in North America.

Fuller's Toronto Armouries stood on a prominent site facing University Avenue, immediately north of Osgoode Hall. Soldiers who trained at the Toronto Armouries would go on to represent Canada in the Boer War as well as both World Wars.

The Armouries were one of the most impressive buildings of 19th-century Toronto, with brick and stone manipulated with superb craftsmanship. Kingston stone was used to accent the windowsills, lintels and great wheeling arches.

The Armouries were demolished in 1963 to make room for new provincial courts and have been called one of the most missed buildings, of many, from Toronto's past.