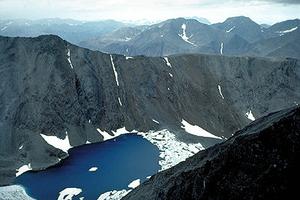 The deep fjords, finger lakes and spectacular rock walls of the Torngat Mountains in Labrador are the legacy of glaciation (photo by John Foster/Masterfile).\n

The Torngat Mountains extend 200 km south from Cape Chidley, Labrador, to Hebron Fjord. The Torngat (Inuktitut, "home of spirits") rise to 1652 m at Mount Caubvick (known as Mont D'Iberville in Québec), crown of the Selamiut ("Aurora") Range and highest peak in Newfoundland and Québec. Other high summits such as Torngarsoak Mountain ("great spirit"), Cirque mountain and Mount Razorback and Mount Tetragona lie entirely within Newfoundland, east of Ungava Bay - Labrador Sea drainage divide. The mountains are part of the Precambrian Shield; Archean gneissic rocks at Saglek Bay are some of the oldest known in North America (3.6 billion years). Proterozoic structures, which govern much of the northern to southern trend in relief, were forged around 2 billion years ago. Proterozoic sedimentary rocks in the Sorviluk Range contain chalcedony, much used in prehistoric northeastern America.

Deep fjords and finger lakes, bound by spectacular rock walls, cut sharply across the high ranges; they are the legacy of glaciation. The Laurentide Ice Sheet, centered far to the west, covered all but the highest summits at least once, although during the last glaciation ice cover was limited and many nunataks provided refuge for arctic and alpine flora and fauna. Over 70 small, active glaciers survive in the Torngat, shaded in deep cirques and sustained by the southernmost extension of arctic climate. Vegetation is sparse tundra, with willow thickets in low, sheltered valleys, and rock desert above 300 m. Wildlife is arctic, with caribou numerous.

Tent rings and stone structures remain from over 6000 years of Maritime Archaic, Dorset, Thule and more recent Inuit settlement. In 1763 over 500 Inuit inhabited the fjords; in 1935 fewer than 50; now none. Trading posts at Saglek Bay (Fort Lampson) and Nachvak Fjord (Nachvak) and the Moravian missions of Hebron and Ramah are abandoned. The closest settlements are Nain, 200 km south and Kangiqsualujjuaq, 100 km west. Inuit from Nain visit the fjords for the summer char fishery. An airstrip at Saglek Bay is used in offshore oil and natural gas exploration.