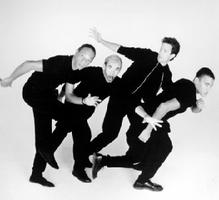 One of the world’s most acclaimed a cappella groups — known for their dazzling harmonies, smooth arrangements, and exuberant, theatrical live shows — The Nylons have had three platinum and three gold records in Canada and sold more than three million albums internationally. Using only percussion for accompaniment, their distinctive, eclectic repertoire includes many US pop hits from the 1960s through the 1980s, such as The Tokens’ “The Lion Sleeps Tonight” and The Supremes’ “Up the Ladder to the Roof.” Their 1987 cover of Steam’s “Na Na Hey Hey Kiss Him Goodbye” was an international hit.

The Nylons were formed in Toronto in 1978 by actors Paul Cooper, Claude Morrison, Marc Connors, and Dennis Simpson. They began performing on a social basis and in a deli where Morrison worked as a waiter, before moving on to successful runs in clubs and cabarets. They chose the name The Nylons as a tongue-in-cheek tribute to such 1950s and 1960s vocal groups as the Chiffons, the Orlons, and the Hollywood Argyles (all named after fabrics), whose songs they often performed. Simpson was replaced by Ralph Cole before the group turned professional in May 1979, and Cole in turn by Arnold Robinson (formerly of The Platters) in 1981.

After signing with Attic Records in 1981, they released their self-titled debut album in 1982, which went gold in Canada in just two months and achieved platinum status on the strength of “The Lion Sleeps Tonight.” They then secured American distribution with Sony subsidiary Windham Hill Records and released One Size Fits All (1982), which also went platinum. In 1982 they gave their first performances in Britain and began touring in the US, where they opened concerts over the years for the Pointer Sisters, Hall & Oates, the Bee Gees, and Dave Sanborn. In 1983 they played Australia and Holland. Their recording of “That Kind of Man” was a hit in the latter, and they sustained their popularity in Holland, Belgium and Luxembourg with annual tours that continued for a decade.

Their 1984 album Seamless went gold in Canada, and the group earned a Juno nomination that year for most promising group. In 1986, they won the Best Singer award at the Tokyo Music Festival for “Up the Ladder to the Roof,” and performed “The Lion Sleeps Tonight” on “Sharon, Lois & Bram’s Elephant Show.” Their 1987 album Happy Together, produced by Chilliwack’s Bill Henderson, earned rave reviews and achieved platinum status in Canada. The group received a Juno nomination that year for Canadian entertainer of the year, and their rendition of “Kiss Him Goodbye” hit No. 12 on the Billboard Hot 100. Their 1989 album Rockapella went gold in Canada, and by the late 1980s The Nylons were making some 100 US appearances annually — usually as headliners — including at Carnegie Hall in 1987.

Changes came to the group in the early 1990s. After he tired of touring, Cooper left in 1990 and was replaced by Micah Barnes. Connors died of AIDS-related illness in 1991, and Billy Newton-Davis took his place. The group’s greatest hits compilation, Illustrious: A Collection of Classic Hits (1993), went gold. Newton-Davis and Barnes were replaced in 1994 by Garth Mosbaugh and Gavin Hope.

The Nylons remained active, even prolific, through the 1990s. They released 12 albums between 1992 and 2002, and received Juno nominations for best R&B/soul recording in 1993 and 1995. Robinson retired in 2006 — replaced by Tyrone Gabriel — and died in 2013. The group’s 2011 record, Skin Tight — which featured the lineup of Mosbaugh, Hope, Gabriel, and founding member Morrison — earned a Juno nomination for best vocal jazz album. They continued to tour internationally in the early 2010s, playing primarily at jazz festivals around the world.

Music of
The Nylons