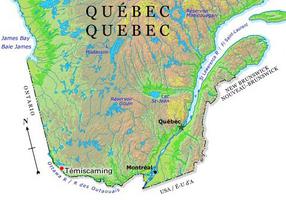 Témiscaming, Qué, Town, pop 2697 (2006c), 2903 (2001c), inc 1988. Témiscaming is located at the southern end of Lac Témiscamingue (spelled TIMISKAMING in Ontario) near the rapids that link the lake with the Ottawa River. In 1888 a sawmill was built nearby. Témiscaming was established in 1917 by the Riordon Pulp and Paper Company, which bought the sawmill and wanted a town to house the employees of its Kipawa Mills paper mill. Thomas ADAMS was hired as the planner and he designed the town in the Garden City style. In 1920 it was incorporated under the name of the mill (Kipawa) but was renamed the following year. The name Témiscaming is derived from an Algonquin expression meaning "deep water," a reference to the lake. Incorporated into Kipawa was the hamlet of South Témiscaming, which was the Canadian Pacific Railway terminal for the area and the steamship port for goods destined for the new communities to the north of Lac Témiscamingue. The railway station built in 1927 is now a historic building.

Témiscaming was for many years a COMPANY TOWN. Originally owned by the Riordon Company (1917-25), it was then directly administered by the Canadian International Paper Company (CIP) until the end of the 1960s. CIP had bought the town as well as the Kipawa Mills plant. Témiscaming's economy is still based on its paper mill, which is now owned by Tembec, a company set up by management and workers of the mill after the mill was shut down by CIP in 1972. In 1988 Témiscaming was amalgamated with the municipality of Letang (incorporated 1980) to form the present town.