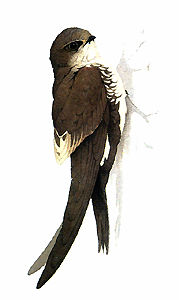 Their rapid, acrobatic flight give these most aerial of birds their name (Macmillan Illustrated Animal Encyclopedia). 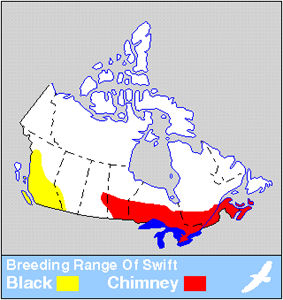 Swift is a common name for about 100 species of birds in 2 closely related families (Apodidae, Hemiprocnidae), sometimes grouped with hummingbirds in order Apodiformes. Swifts occur almost worldwide, wherever their flying-insect prey is sufficiently abundant.

Long, slender, pointed wings and cylindrical bodies make possible the rapid, acrobatic flight for which these most aerial of birds are named. The family name Apodidae [Gk, "footless"] is derived from the swift's tiny feet, with strong claws on 4 toes showing specialized grasping abilities ideal for clinging to cliff faces. Swifts are mostly dull coloured.

Most species nest colonially in caves or hollow trees; others under waterfalls, in sandbanks, in old swallow nests and even on palm leaves. The saliva that glues together most nests is the sole component of nests of some oriental species - these are used for bird's-nest soup!

Four species breed in Canada. Chimney swifts (Chaetura pelagica), which breed across southern Canada from eastern Saskatchewan to the Maritimes, and sometimes Vaux's swifts (C. vauxi) of southern BC, may attach nests inside chimneys and building walls. Vaux's swifts nest primarily in old-growth forest and often roost there. Two cliff-dwelling species nest in western Canada, the large black swift (Cypseloides niger) through much of BC and locally in Alberta, and the white-throated swift (Aeronautes saxatalis), generally restricted to the Okanaganand Similkameen valleys, but suspected of nesting along Arrow Lake in the Kootenays and known to have wandered to Vancouver Island.