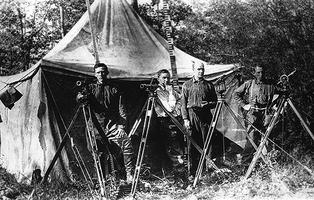 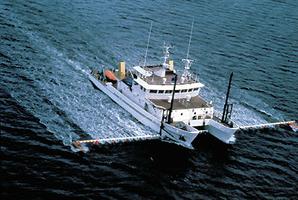 The transportable sweep on the vessel's bow provides total bathymetric survey coverage for the charting of harbours (photo by Roger Bélanger/courtesy Bedford Institute of Oceanography).
PreviousNext

Surveying is the scientific measurement of natural or man-made features of the Earth's surface. On any area of land to be measured, it is always possible to choose 2 points and measure the distance between them, thus creating a line which can be drawn to scale on a map, plan or section (see CARTOGRAPHY). Other points can be located, relative to the line, by taking 2 other measurements, which can also be drawn to scale. These measurements may be 2 angles, one measured line and one angle, or 2 measured lines. From these measurements, a map can be built up with the features accurately located with reference to each other. Surveying is used to make maps of all kinds, to locate buildings and engineering works (eg, dams, bridges, tunnels) accurately, to establish property lines, to chart waterways, and to position such devices as SATELLITES and oceangoing oil-drilling platforms.

Location of points is made through operations which deal with the 2 dimensions of the horizontal plane and those which locate the vertical or levelling plane. Plane surveys of small areas treat the surveyed area as a horizontal plane, perpendicular to the direction of gravity as defined by a plumb bob (ie, a suspended weight which, when hanging freely, points to the Earth's centre). Plane surveys are limited to an area of about 250 km2. In larger areas, the discrepancy between the horizontal plane and the curvature of the Earth's surface becomes too great. Geodetic surveys correct for the curvature by establishing a network of precisely located "control points" on the surface. They are used to locate the position of parallels of latitude and meridians of longitude and to build up a grid to serve as a control for other types of survey work. Cadastral or land surveying determines property lines and other legal boundaries. Hydrographic surveys chart the features of waterways, determining the shape of the coastlines, currents and underwater terrain, and the position of shoals and other hazards to navigation (see HYDROGRAPHY).

Until very recently, manually controlled instruments were used to take distance and angular measurements. The surveyor's chain, introduced in 1620, was 66 feet (about 20 m) long, composed of 100 links. The chain was used as a standard measurement in many Canadian surveys, eg, the Dominion Lands Survey, until replaced by steel tapes. Distance could also be determined through the use of telescopic sighting devices (eg, transit) and optical devices (eg, range finder). Angular measurements were made with the theodolite and the transit, telescopic measuring devices that permitted precise determination of angles between 2 sighted targets. Astronomical observations and magnetic compass readings were used to determine location and magnetic bearings, while levels and barometers were used for vertical measurement.

On larger projects electronic instruments, which use radio, RADAR or LASER frequencies to determine distance very precisely, are employed. Signals may be bounced off a reflector target and received by the instrument again; or signals may be sent out to a repeating transmitter which rebroadcasts them immediately back to the transmitter. In both cases, the elapsed time is measured, allowing precise determination of distance. Many of these electronic distance meters provide a simultaneous printout of measurements being made.

Location through the satellite method involves triangulation from a point on Earth to the position of 2 satellites and is exact to millionths of a metre. Calculations can be made and co-ordinated through computers, which can also be used as an aid in plotting maps and sections.

Photogrammetry, the method of determining the shapes and sizes of objects and their relative positions using photographs, has been in use since the 1860s. Aerial photogrammetric techniques (ie, aerial surveys) have been developing in Canada since about 1920. REMOTE SENSING is a more recent technology which uses information or images from orbiting satellites, such as the Landsat satellite, to build up comprehensive data on features of Earth's surface.

Canada has a land area of nearly 10 million km2; hence, survey work has developed as a major public enterprise. After Confederation, 1867, a vigorous period of BOUNDARIES surveying began, with the determination of the FORTY-NINTH PARALLEL between the Rocky Mts and Lake of the Woods completed in 1874. By 1925 the joint Canadian-American INTERNATIONAL BOUNDARY COMMISSION had completed work on about 8000 km of border between the YT and Alaska, western Canada and the US and through the Great Lakes and eastern Canada to the Bay of FUNDY.

The Dominion Lands Survey of the Dominion Lands Branch was established in 1871 to survey the western territories of the HUDSON'S BAY COMPANY, which had become part of Canada (see RUPERT'S LAND; DOMINION LANDS POLICY). Under J.S. DENNIS from the office of the surveyor general, work began to divide the newly acquired lands into 6 mile square (10 km by 10 km) townships, containing 36 sections of 640 acres (about 259 ha) and, thus, to open the lands for settlement. The areas surveyed were record breaking. In 1883 about 11 million ha were surveyed in connection with land grants to the CANADIAN PACIFIC RY, along its western route.

The GEOLOGICAL SURVEY OF CANADA was founded in 1842 under Sir William LOGAN. Throughout the 19th and early 20th century, exploratory and geological surveys were performed in remote regions of the country by adventurous surveyors such as A.P. LOW, G.M. DAWSON, D.B. Dowling, R.G. MCCONNELL and J.L. Charles. In the same period, hydrographic and topographic surveying intensified. Édouard DEVILLE introduced photogrammetric techniques into surveying, while the work of Otto Klotz and W.F. KING in extending longitude meridians to the Pacific led to the founding of the Dominion Observatory for ASTRONOMY in Ottawa.

Canadian surveying techniques have undergone continual refinement in the 20th century, and precise maps have now been made for all parts of the country. The accuracy of present-day surveying is an important factor in sophisticated transportation networks, major hydroelectric installations, communications networks and other facilities where safety and success depend upon exact location. Surveying is an important field within CIVIL ENGINEERING and students can receive training at schools or faculties of engineering or other educational establishments (eg, RYERSON POLYTECHNICAL INSTITUTE). Graduates may complete articling programs to become eligible to take the Canada Land Surveyor examinations. 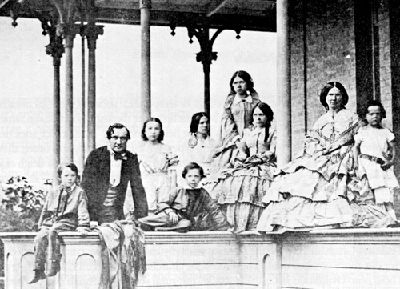