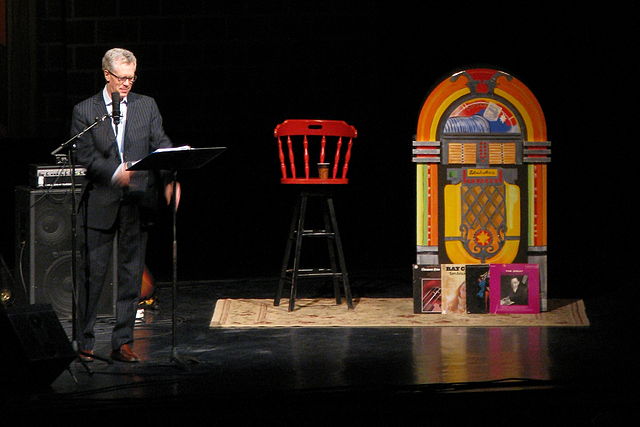 Stuart McLean during a live recording of The Vinyl Café in 2008.

Stuart McLean was born in Montreal, the son of Andrew Thompson and Margaret Patricia McLean. He has often cited his childhood as a source of inspiration for his later work as a writer and radio host. “I grew up in Montreal West, a community fenced in on three sides by railroad tracks,” he said in a 2013 interview with the Toronto Star. “It created a sort of playground that was also a rock-solid place. My mom and dad had a fantastic marriage and all of that combined to make me feel I came from a place of safety and security and community.”

McLean’s interest in radio began in childhood, after his father bought him a Motorola transistor radio while he was sick in bed. A fascination and passion for the medium stayed with him ever since.

McLean got his first professional experience in radio working as freelance journalist for the CBC in Montreal. He then worked as a researcher for the broadcaster’s national call-in show, Cross-Country Check Up. In 1978, he began producing documentaries for the CBC Radio program Sunday Morning. From 1982 to 1984, he acted as the show's executive producer. In the 1980s, he appeared as a regular contributor and occasional host on CBC Radio’s Morningside, the national weekday morning show hosted by Peter Gzowski.

McLean’s slice-of-life storytelling charmed listeners across the country, and his published collection of radio essays, The Morningside World of Stuart McLean (1989), became a Canadian bestseller. It was also a finalist for the 1990 City of Toronto Book Awards.

From 1984 to 2004, McLean was a professor of journalism at Ryerson Polytechnic Institute (now Ryerson University) in Toronto, where he was also named professor emeritus.

In 1994, Stuart McLean created the CBC Radio program The Vinyl Café as a summer replacement show. With his signature understated humour, McLean would recount the exploits of a fictional family whose patriarch, Dave, owns the world's smallest record store. Aside from McLean’s storytelling, a portion of The Vinyl Café was always dedicated to a musical performance.

In 1998, McLean began taking the Vinyl Café on the road to theatres across the country. It was broadcast every week on CBC Radio. It was also heard via satellite radio around the world and on public radio stations in the United States.