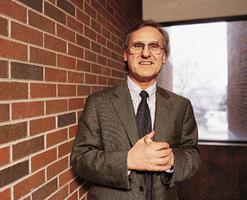 Stephen Lewis, one-time leader of the NDP and former Canadian ambassador to the United Nations (courtesy Maclean's/photo by Peter Bregg).

Stephen Henry Lewis, politician, diplomat, author, journalist, labour arbitrator (b at Ottawa 11 Nov 1937), son of David LEWIS. After teaching English in Africa, Lewis worked as director of organization for the federal NEW DEMOCRATIC PARTY (1961-62). He was a member of the Ontario legislature for Scarborough West from 1963 to 1978 and became leader of the Ontario NDP in 1970. He was active in demanding the 1972 disbandment of the WAFFLE, a left-wing NDP faction. As leader, his greatest electoral success occurred in 1975 when the NDP became the Official Opposition. A year after the NDP's electoral setback in 1977, Lewis resigned as leader and became a media commentator, lecturer, and labour arbitrator.

In 1984, he was appointed by Brian MULRONEY's government as Canada's ambassador to the UNITED NATIONS, a post he held until 1988. Lewis was also appointed special advisor to the UN's Secretary-General regarding African affairs until 1991. In the wake of street disturbances in Toronto in 1992, Bob RAE's Ontario NDP government hired him to prepare a report on race relations in the city. Lewis returned to the UN as the deputy executive director of UNICEF from 1995 to 1999. In 1997, he was appointed by the Organization of African Unity to a panel to investigate and issue a report (2000) on the Rwandan genocide. Since 2001, Lewis has served as a special envoy to UN Secretary-General Kofi Annan regarding HIV/AIDs in Africa.

In addition to being a passionate and articulate spokesperson for the plight of Africans suffering from the AIDS pandemic, Lewis established the Stephen Lewis Foundation to assist the victims of this disease. In 2005, Lewis presented the CBC Massey lectures and these, in turn, were transcribed into the best-selling book Race Against Time. Lewis is also a prominent spokesperson for the Canadian chapter of Make Poverty History.

Recognizing his distinguished public service, Lewis was appointed a Companion of the ORDER OF CANADA (2002) and was awarded the Pearson Peace medal (2004) by the UN Association in Canada. Among his current roles, he is a member of the World Health Organization (WHO) Commission on the Social Determinants of Health and a senior advisor to Columbia University's Mailman School of Public Health.

Lewis is a key member of an illustrious family of political activists and commentators: his father David served as national secretary of the CCF and federal leader of the NDP; Stephen's wife Michelle Landsberg is a respected journalist and author; his son Avi is a high-profile TV personality and filmmaker; and his daughter-in-law, Naomi Klein, is a best-selling author and filmmaker.