The waterway, some 3,700 km long from Île d’Anticosti to the head of Lake Superior, permits vessels of up to 225.5 m long, 23.8 m wide and a maximum draft (i.e., the distance between the top of the water and the bottom of the ship) of 8.1 m to sail from Montréal to Duluth, Minnesota, on Lake Superior. The majority of the cargo moving through the Seaway is iron ore, coal and other mine products, followed by agricultural goods, other bulk cargo (e.g., petroleum products and cement) and finished goods (e.g., iron and steel). Approximately 44 million tonnes of cargo moves through the Seaway annually, in contrast with the annual average of about 11 million tonnes in the 1950s.

Between 1913 and 1932, the Welland Canal (between Lakes Erie and Ontario) was rebuilt, but the United States was reluctant to enter a larger scheme, that is, to rebuild the Montréal–Lake Ontario channels. A threat by the Canadian government in 1951 to build a seaway entirely within Canadian territory resulted in a final agreement in 1954. Construction on the St Lawrence Seaway and Power Project began on 10 August 1954. In addition to the building of seven locks and deepening navigation channels to a depth of 8.2 m, the project also included the construction of the 2,090 megawatt Moses-Saunders Powerhouse near Cornwall, Ontario. The Seaway was opened to commercial traffic 25 April 1959. The official opening on 26 June 1959 was attended by Prime Minister John Diefenbaker, President Dwight D. Eisenhower and Queen Elizabeth II.

Construction of the Seaway was a monumental engineering and construction feat. In addition to the primary works required to create the Seaway, ancillary works, such as major bridge and tunnel construction, were carried out in Montréal, Beauharnois, Cornwall and Massena. Moreover, the creation of Lake St Lawrence resulted in the flooding of 15,400 hectares and necessitated the relocation of highways, nine small communities, and parts of the towns of Iroquois and Morrisburg, Ontario. In all over 525 dwellings and 6,500 people, 64 km of railway track and 56 km of highway were relocated, and two new communities in Ontario, Ingleside and Long Sault, were created. (See also The Lost Villages.)

The St Lawrence Seaway Authority, a federal crown corporation, was established by Act of Parliament in 1954 to construct, operate and maintain the Canadian portion of the waterway between Montréal and Lake Ontario, including the locks in Canadian territory (five of the seven) and also the Welland Canal. In 1998, an Act of Parliament allowed for the Canadian part of the Seaway to be operated by Seaway users and other stakeholders as a not-for-profit corporation (St Lawrence Seaway Management Corp) under contract to the Canadian government.

The US government formed the St Lawrence Seaway Development Corp to operate the two locks near Massena, New York. The four US locks on the St Mary’s River are operated by the US Corps of Engineers.

The Montréal–Lake Ontario section, which is often thought of as the whole Seaway, naturally divides into four parts: the Lachine, Soulanges, Lake St Francis and International Rapids sections. The Lachine section includes the 33 km South Shore Canal, with the St Lambert and Côte Ste Catherine locks bypassing the Lachine Rapids. The two locks provide a total lift of 13.7 m to the level of Lake St Louis. 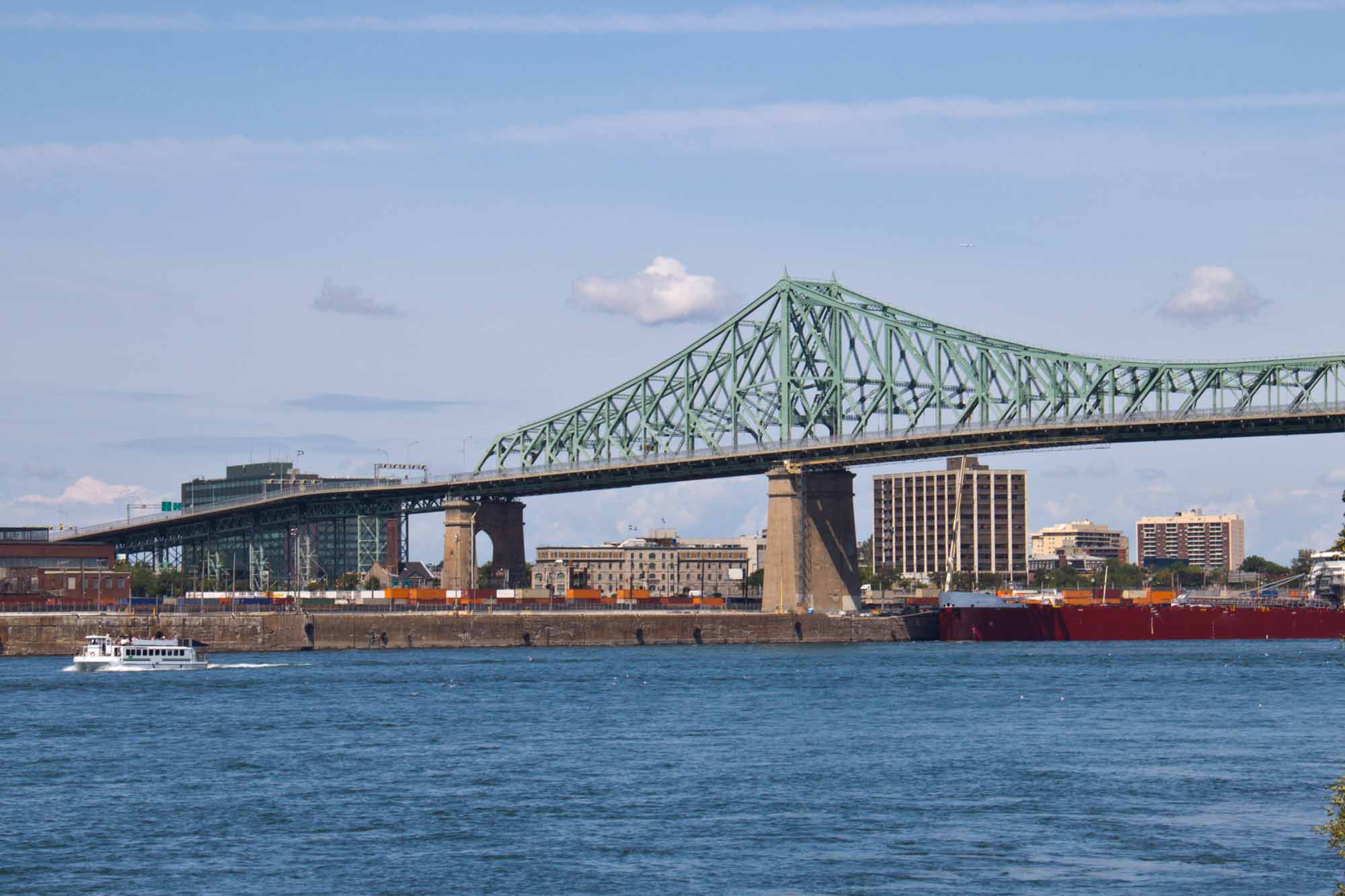 Yachts moored side by side in the St. Lambert locks, just a few minutes from the Montréal Harbour port.
PreviousNext

The fourth segment, the International Rapids Section, stretches 70.8 km from Cornwall to Prescott. It includes the 16 km long Wiley-Dondero Ship Canal and the two US-owned Snell and Eisenhower locks near Massena, New York. These two locks provide a lift of some 26 m to the level of Lake St Lawrence. At the west end of this lake the Iroquois lock, located at Iroquois, Ontario, and adjacent to the Iroquois control dam, provides for control of the level of Lake St Lawrence relative to that of Lake Ontario. West of the Iroquois lock additional dredging was required to complete the Seaway to Lake Ontario. Together, all the locks between Lake Ontario and Montréal lift a westbound vessel about 69 m. 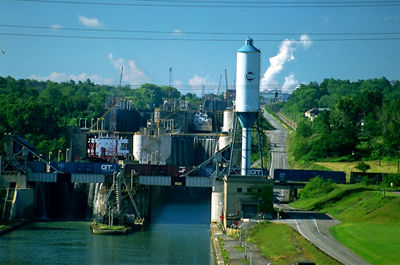 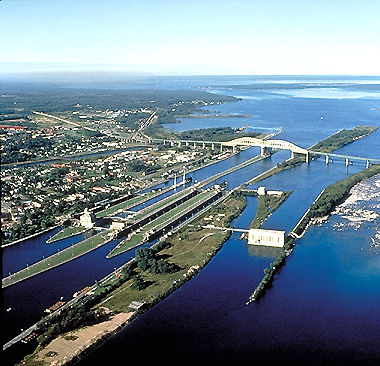 Lake and ocean shipping bypass the rapids through the Soo Locks at Sault Ste Marie, Ontario, opened in 1895, and 4 American locks that handle more traffic than any comparable system in the world (Colour Library Books).
PreviousNext

Between Lakes Ontario and Erie, the Welland Canal circumvents Niagara Falls. Its eight locks lift a westbound vessel 99.4 m over a distance of 43.5 km. Between Lakes Erie and Huron, the US deepened the Detroit River, the St Clair River and Lake St Clair. The St Marys River Canal links Lakes Huron and Superior. Each of its four parallel locks, on the US side, lifts a westbound vessel the required 6.4 m to bypass the St Marys rapids. A 274 m long Canadian lock was open to commercial navigation from 1895 to 1987, when a structural fault in the lock wall forced its closure. This lock was reconstructed as a smaller lock (77 m) within the original lock structure and reopened to navigation in 1998. It is operated by Parks Canada as part of the Sault Ste Marie Canal National Historic Site, and is only open to small sightseeing and pleasure craft.

The expenditure of public funds on the Seaway was not without opposition. The construction of the Seaway was considered by the railways and East Coast ports to be unfair subsidized competition. Shippers, although in favour of the Seaway, opposed implementation of tolls. The original St Lawrence section of the Seaway cost Canada $330 million and the US $130 million. Canada paid a further $300 million to improve the Welland Canal.

Repayment of capital debt, interest and operating costs could not be covered under the original financial arrangements, and in 1977 a change in legislation converted the Canadian Seaway Authority debt to equity held by Canada, but required that revenues cover all operating and maintenance costs; this change has been successful. An additional $600 million, spent by the two countries for hydroelectric development, has been recovered by electricity sales. 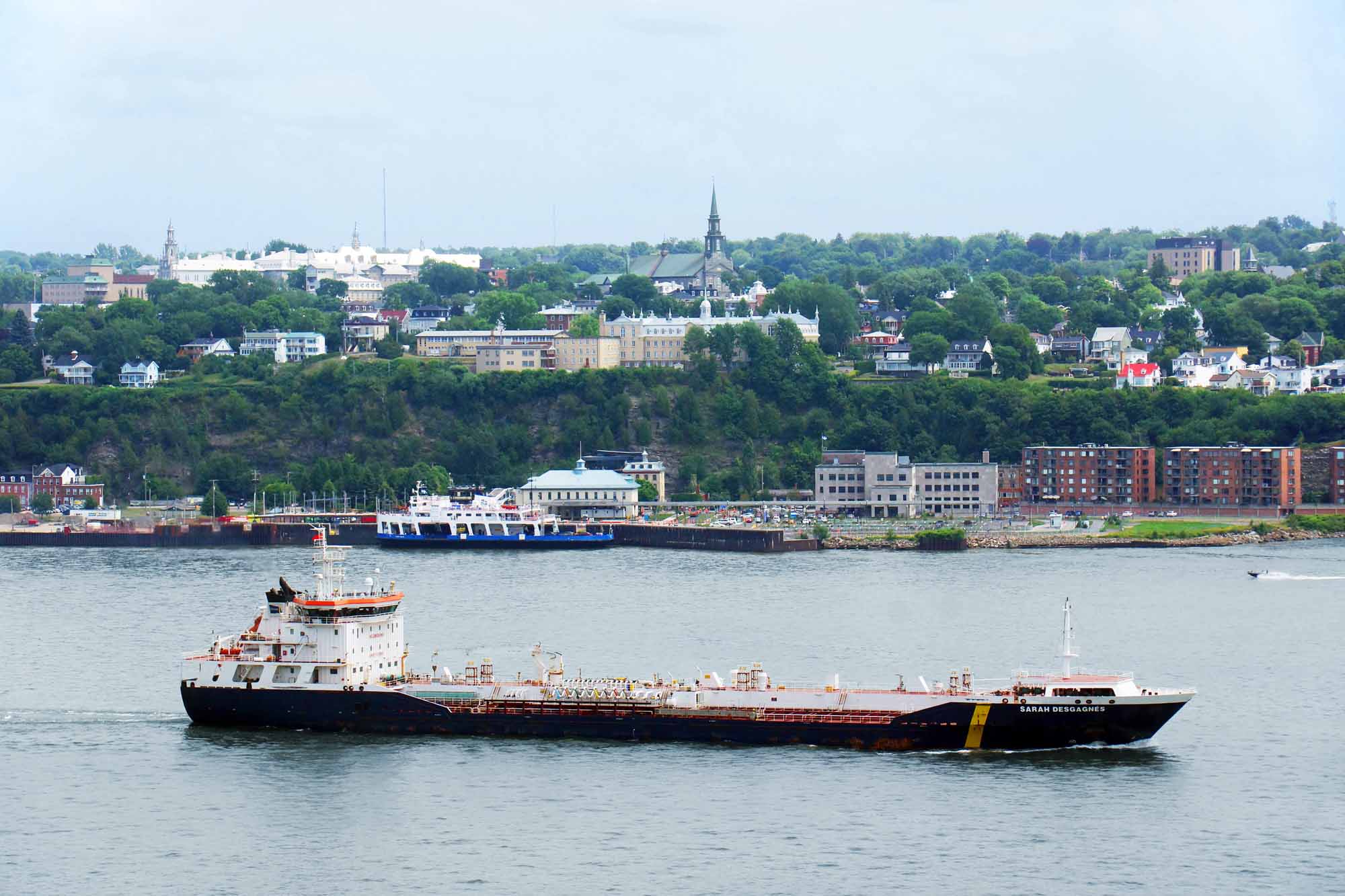 The Seaway has a major economic impact on Canada and the US. It provides economical freight rates for bulk commodities and makes an important contribution to the basic industries of both countries. The Seaway made possible the exploitation of the vast iron ore deposits of Québec and Labrador, and turned Canada from an importer to an exporter of iron ore.