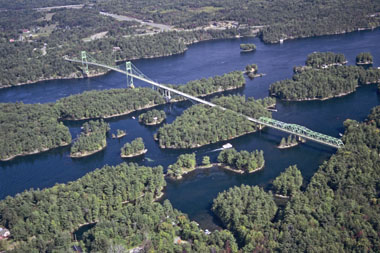 The International Bridge crosses over the islands of the St Lawrence River (courtesy Parks Canada). 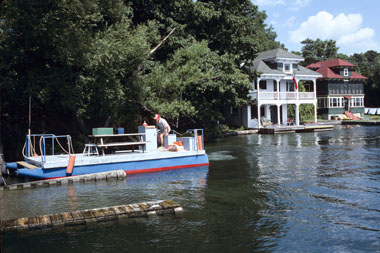 Vacation homes built in the early 1900s are part of the park landscape (courtesy Parks Canada).\r\n

Most of the park islands are the summits of ancient hills of the Frontenac Axis, a strip of Precambrian granite connecting the Canadian Shield with the Adirondack Mountains in New York State. After the retreat of glaciers, the hills were flooded by the newly formed St Lawrence River, resulting in the Thousand Islands landscape.

From barren, lichen-covered rock to lush, deciduous woodlands, each island has its own character, and collectively they support a remarkable diversity of plant and animal life. Many species are typical of regions far to the south and occur nowhere else in Canada, such as the pitch pine (Pinus rigida). A short walk across one of these rocky islands can take you from a hardwood forest typical of areas much further south to moist, shady slopes where northern species flourish. A few of the islands are made of limestone, resulting in an appearance and a mix of species different from that of the granite isles.

There is evidence of human use of the islands dating back thousands of years. The islands are the traditional territory of the Haudenosaunee (also known as the Iroquois) and later the Mississauga who hunted and fished in the area. Explorers, fur traders and missionaries passed this way, but the scant soils did not attract settlers until the late 1770s, when Loyalists took up land. During the War of 1812 the area was a vital military route. Later it became a haven for boaters and cottagers. In 1904, as more islands became cottage sites, local residents urged the federal government to reserve for the public 9 islands designated for sale. Together with land donated by the Mallory family that same year, these parcels of land formed the nucleus of the park. In 1914 it was formally established as a national park. St Lawrence Islands National Park is a key regional partner of the Frontenac Arch Biosphere Reserve since its designation in 2002.