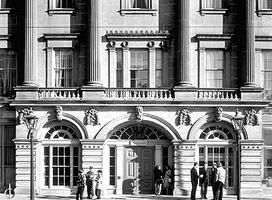 The architecture of the hall reflected the influence of the Renaissance style, with its raised portico over an arcaded base (photo by Steven Evans).

St Lawrence Hall. Toronto civic building which served in the mid-19th century as the centre of the city's musical life. It was designed in a neoclassical style by the Toronto architect William Thomas and opened in 1850. Located on the southwest corner of King and Jarvis streets, it was attached by a market annex to the city hall at Front and Jarvis. The four-storey St Lawrence Hall included ground-level stores and upper-level offices. A third-floor auditorium, 30 m by 12 m, seated 1000 for concerts and speeches. A raked balcony at the north end served as a speaker's platform, and a thrust stage was located at the south end. Musical activity in the hall included recitals by Jenny Lind (1851), Ole Bull (1853), Adelina Patti (1853, 1860), and Sigismund Thalberg (1857), presentations by the Toronto Vocal Music Society and Toronto Philharmonic Society, minstrel shows, and, later, Gilbert & Sullivan productions by Upper Canada College students. In the late 19th century, however, new halls more conveniently located brought about a decline in the use of St Lawrence Hall.

In 1967, as a Toronto centennial project, the building was restored, and the auditorium came into use again for social functions and chamber music concerts.The building also houses the administrative offices and rehearsal rooms of the National Ballet of Canada.