Founded in 1861 by Father Albert LACOMBE as an Oblate mission, it was named by Bishop A. Taché after Lacombe's patron saint and is Alberta's oldest non-fortified community. The log chapel was built on the high ground north of the Sturgeon River. A second, large church was built in 1870 and served as a cathedral. The mission was a refuge for some 700 MÉTIS and Native people during a devastating smallpox epidemic in 1870. The mission later became Oblate headquarters and the bishop's residence. 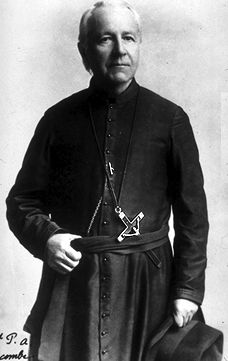 Lacombe used his trace of native blood to gain entry to the hearts of the Métis and native peoples in 1852 when he came west to serve them (courtesy PAA). 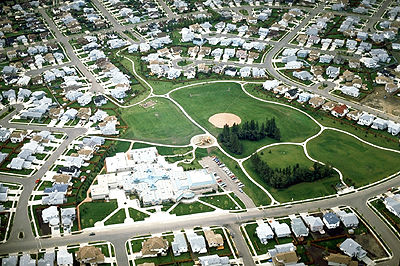 St Albert has grown into a city providing services for the extensive farming area north of Edmonton. Recently the population has increased greatly as the city has become a dormitory for the adjacent capital, but it does have 2 business parks which attract light industry. The city has resisted the political encroachment of its growing neighbour.

St Albert Place, designed by Douglas CARDINAL, houses the city's major cultural facilities (Arden Theatre, an arts studio and public library) as well as the city hall. Built along the south bank of the Sturgeon River, it is the central point of Red Willow Park which runs down the banks of the river connecting most of the city's other cultural and recreational facilities.

St Albert has preserved much of its missionary past. The mission buildings still stand, and the original log church was restored and opened in 1983 as Father Lacombe Chapel historic site. The chapel's holdings were removed in 1979 and are now housed in the Musée Héritage Museum, which is also in St Albert Place. The bishop's residence has also been restored, and the tombs of Father Lacombe and Bishop Vital GRANDIN lie in the crypt of the modern church.