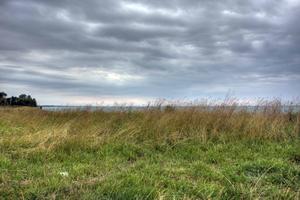 Soybean (Glycine max) is a herbaceous annual belonging to the legume family, grown as an oilseed crop in Canada. The soybean, among the oldest of cultivated crops, probably originated in East Asia. Introduced into the US as a hay crop about 1800, it was not recognized as a valuable source of edible oil until the early 1900s. During and immediately after the Second World War, soybean production expanded rapidly, and the US, Brazil, Argentina and China account for over 85% of world production. In processing, the seed is crushed and the oil extracted. The oil, a high-quality cooking oil, is used in the production of margarine, shortening and salad oils. The meal remaining after the oil is extracted is a high-protein livestock and poultry feed. As a legume, the soybean plant can fix atmospheric nitrogen in its root nodules. The nodules are formed early in the growth of the plant, as a result of an interaction between the roots and a soilborne bacterium, Rhizobium japonicum. Soybeans are a warm-season crop, requiring a mean summer temperature of 21°C and a frost-free period of 120-150 days for optimum production; Most of Canada's annual production (nearly 5 million t) is grown in southern Ontario and Québec. Smaller amounts are also cultivated in Manitoba and Prince Edward Island.