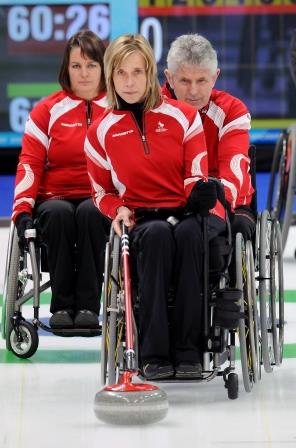 Sonja Gaudet is the third of four children of Abraham and Johanna Melis. She has two older sisters, Loesje and Joanne, and one younger brother, Paul. Her parents immigrated to Canada from the Netherlands in 1962 and settled in North Vancouver. ( See also Dutch Canadians.) Abraham — who had served in the Royal Netherlands Navy and Dutch National Police Force — was an athlete who played soccer while growing up in the Netherlands. He was also involved in boxing and softball in  British Columbia.

Like her father, Sonja was very active as a child. She played basketball, volleyball, tennis and softball, as well as swimming, biking and skiing. “I was definitely encouraged by my family at a young age to try any and every sport out there,” she later told the Association of Canada’s National Team Athletes.

Sonja Gaudet remained active as an adult. She made time for sports after her marriage to Dan Gaudet and the birth of her two children, Alysha and Colten. She was 31 years old when she suffered a serious T-56 spinal cord injury as a result of a fall from a horse while riding near her home in Vernon, British Columbia.

“The biggest challenge was raising two children while being paralyzed from the bra line down,” she later recalled. “I would say that giving up was not an option for me at all. I had two kids at home that were three and six. What choice did I have but to get better and to get back home?”

Gaudet turned to wheelchair athlete and humanitarian Rick Hansen for advice on continuing to have a healthy lifestyle, overcoming the challenges of raising children from a wheelchair and exploring adaptive sporting opportunities. Three years after her accident, she returned to adapted versions of some of her favourite sports, including tennis, basketball, rowing, cycling and swimming. She also became an ambassador for the Rick Hansen Foundation. She tried to make Vernon more accessible by helping to create new recreational opportunities for people with disabilities, including a wheelchair basketball program for children.

Staying positive was very important to Gaudet. “I realized soon, right as soon as I’d had my accident, through talking to the right people, that there still isn’t anything you can’t do with the right equipment and the right attitude,” she said in 2010.

Gaudet was first introduced to wheelchair curling when she was asked for advice on how to make the washroom at the Vernon Curling Club more wheelchair accessible. The club was hosting a beginner wheelchair curling clinic and, at age 37, Gaudet decided to give it a try.

In Turin, Gaudet played lead, alongside skip Chris Daw, third Gerry Austgarden, second Gary Cormack and alternate Karen Blachford. Team Canada had the best record in the round robin, with five wins and two losses. Canada beat Norway 5–4 in the semi-finals and Great Britain 7–4 in the gold-medal game. 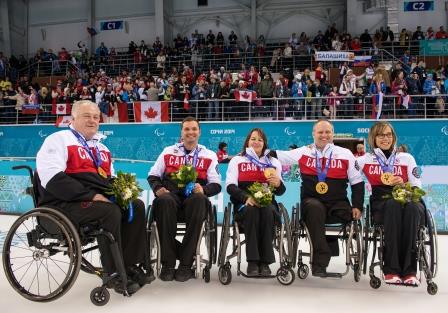 Team leader Wendy Morgan had high praise for Gaudet. “Sonja’s a real competitor,” she said in 2010. “She was the new kid on the block then, and she just stepped up and proved herself.… She was dynamite.”

At the 2009 World Wheelchair Curling Championship in Vancouver, Gaudet started as the alternate for Team Canada. She moved to lead for Canada’s sixth game of the tournament against South Korea in a 9–4 victory. Gaudet remained the lead for the rest of the tournament. Canada won its first ever World Wheelchair Curling Championship by beating Sweden 9–2 in the gold-medal game.

A year later, at the 2010 Paralympic Winter Games in Vancouver, Team Canada successfully defended its Paralympic title by defeating South Korea 8–7 in the gold-medal game. Gaudet was the Canadian lead for the entire tournament; she won alongside skip Jim Armstrong, third Darryl Neighbour, second Ina Forrest and alternate Bruno Yizek. The 2010 Paralympic gold medal was very meaningful for Gaudet, as her family was in attendance. Gaudet also made Paralympic history in Vancouver by becoming the first wheelchair curler to win two Paralympic gold medals.

In 2011, Gaudet won her second World Wheelchair Curling Championship, playing with her teammates from the 2010 Paralympics. The Canadian team was undefeated in the tournament in Prague, Czech Republic, and beat Scotland 7–3 in the gold-medal game. In 2013 in Sochi, Russia, Gaudet teamed up with Armstrong, third Dennis Thiessen, Forrest and alternate Mark Ideson to win Canada’s third straight World Wheelchair Curling Championship. They beat Sweden 4–3 in the gold-medal game. 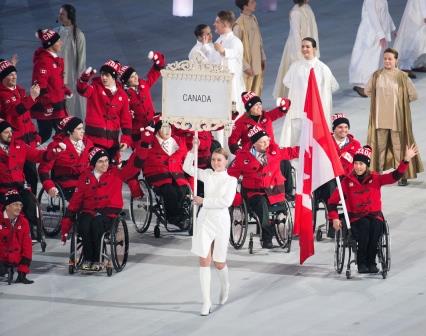 Gaudet was named the Canadian flag bearer for the opening ceremonies of the 2014 Paralympic Winter Games in Sochi. Team Canada won its third consecutive Paralympic gold medal in wheelchair curling by beating Russia 8–3 in the gold-medal game. Gaudet shared lead duties with Ideson throughout the tournament.

In 2009, Gaudet became the first curler to use a balance post, an aluminum pole attached to her wheelchair. By gripping the post with her free hand, Gaudet could sit up straight in her wheelchair when throwing a rock, enabling greater accuracy. Prior to this innovation, her momentum caused her to move forward and out of her wheelchair. Due to Gaudet’s innovative efforts, she was nicknamed “The Brain” in a 2012 Canadian Paralympic Committee campaign. (The campaign featured a number of “super athletes,” including cross-country skier Brian McKeever, who was dubbed “The Professor”.)

Canada at the Paralympic Games