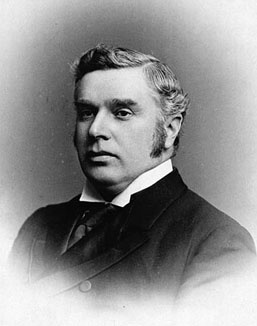 Thompson died of a heart attack at Windsor Castle, London, falling dead into the arms of the Queen's physician (courtesy National Archives of Canada/PA-27084).

Sir John Sparrow David Thompson, lawyer, judge, politician, prime minister (b at Halifax 10 Nov 1845 [not 1844 as often cited]; d at Windsor Castle, Eng 12 Dec 1894). He was admitted to the NS Bar in 1865 and elected alderman for Halifax in 1871, a position he held for 6 years. Although raised a Methodist, he converted to Roman Catholicism in 1871. In 1877 he was elected to the NS Assembly as member for Antigonish, a Scottish Catholic constituency, and was attorney general in the Conservative regime of Simon Holmes, 1878-82. On Holmes's retirement, he was briefly premier, but he and his government were defeated in the 1882 election. He was then appointed judge of the Supreme Court of NS.

In 1885 Thompson was persuaded to return to political life, this time at Ottawa. He was sworn in as minister of justice in Sir John A. Macdonald's government in Sept 1885 and was elected MP for Antigonish, positions he held for the rest of his life. Confident, courteous and always master of his subject, Thompson soon became important in Cabinet. When Macdonald died in June 1891, he was the logical successor, but J.J.C. Abbott reluctantly took office to avoid the acrimony that would have been caused by Thompson's religion. Nevertheless, Thompson acted as House Leader and, when Abbott retired, became prime minister 24 Nov 1892, when he was 48 years old. He was a capable leader, though without Macdonald's ability to soothe his party's divisions. His main contribution was the Canadian Criminal Code of 1892. Thompson died only an hour or so after being sworn in as a member of the Imperial Privy Council by Queen Victoria at Windsor Castle. His funeral took place in Halifax 3 Jan 1895. His estate, which amounted to $20 000, was a measure of his probity in public office, but it left his family, which included a crippled daughter, hard up. A public subscription was launched. Thompson's death left the Conservative Party bereft of moral courage and force.