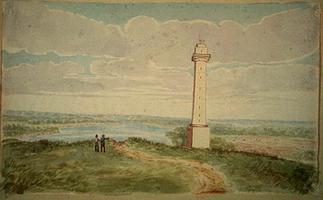 Isaac Brock was long remembered as the fallen hero and saviour of Upper Canada (courtesy Library and Archives Canada/C-36181).
PreviousNext

Sir Isaac Brock, military commander, administrator of Upper Canada (b at St Peter Port, Guernsey 6 Oct 1769; d at Queenston Heights, UC 13 Oct 1812). Isaac Brock was educated in Guernsey, Southampton (England) and Rotterdam. At age 15 he entered the army by buying a commission in the 8th (King's) Regiment of Foot. He transferred to the 49th Regiment in 1791 and soon after demonstrated his willingness to take a calculated risk. Another officer who was both "a confirmed duelist" and a dead shot challenged him. Being tall, Brock knew that he would present an easy target at the usual distance of 12 paces apart. As they prepared for the duel, he demanded that they meet on equal terms. For this purpose he produced a handkerchief and insisted they fire at each other, not from the usual distance apart, but across the handkerchief. His antagonist declined and soon after left the regiment. Brock seemed to possess almost uncanny insight into what others - particularly opponents - were thinking and how they might respond to determined action.

Brock's military career advanced another step in 1797 when he bought a commission as lieutenant colonel and became the regiment's commanding officer. His brother, William, loaned him the money to buy commissions - a common practice in the British army of that time - and, later, when William went bankrupt, Brock was faced with the problem of paying off his debt. He arrived in Canada in 1802 with the 49th and was promoted to major general in 1811. With the forthcoming departure of Francis Gore, he was appointed president of the executive council of Upper Canada (administrator) and commander of the forces there. At the outset of the War of 1812, he took the bold initiative of ordering the capture of the American Fort Michilimackinac.

Major General William Hull had invaded Upper Canada in July, but withdrew to Fort Detroit upon learning that Brock was leading troops to that front. He arrived at Fort Amherstburg and knew from captured correspondence about serious dissension among Hull's officers and Hull's increasing fear of defeat. Brock met Tecumseh and the two became firm allies. Brock decided to act quickly before Hull received reinforcements. On the night of 15-16 August, Tecumseh and his warriors crossed the Detroit River to be followed early the next morning by Brock and his troops. Brock's intention was to form up his troops and hope Hull would come out of his strong, well-armed fort to fight in the open. But, on hearing of American troops at his rear, Brock decided on immediate attack. He led his troops forward even though all they could see facing them as they approached were two 24-pounder guns, their gunners standing by with their matches burning.

Brock was urged to let his officers precede him and he refused because he would never ask his men to go where he would not lead them. He was counting on Hull to back down and he was right. Without consulting anyone, the American general ordered the gunners not to fire, had a white flag raised in the fort, and sent two officers to ask for terms. Brock sent his aides Colonel MacDonell and Captain Glegg into the fort, where they negotiated Hull's total surrender. Afterwards, there was some criticism that Brock had acted rashly but in a letter to his brothers, he asserted that he had proceeded "from a cool calculation of the pours and contres." His calculated risk produced a completely unexpected victory with the capture of an American army, fort, and territory (Michigan), as well as great quantities of war materiel. A mood of defeatism in Upper Canada changed to optimism that the troops, militia and Aboriginal allies could defend the province.

When the Americans invaded again at Queenston Heights, Brock was awakened from sleep at Fort George and rode hastily to the village. Almost as soon as he arrived, the Americans seized a gun battery on the heights. Brock decided a direct attack was needed immediately without time to wait for reinforcements. His calculated risk proved to be rash, for as he led his troops he was hit in the chest by a shot from an American soldier. Brock died instantly without delivering any of the final words (such as "Push on brave York Volunteers") that have been attributed to him.

The memory of Brock, the saviour of Upper Canada, remains extraordinarily strong in Ontario history. His body, interred at Fort George, was moved in 1824 to the summit of Queenston Heights under an imposing monument, which was destroyed in 1840, but replaced in 1853. Today, the stately Brock's Monument dominates the battlefield.