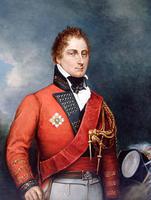 Sir Gordon Drummond, army officer, colonial administrator (b at Québec 27 Sept 1772; d at London 10 Oct 1854). The first Canadian-born officer to command both the military and the civil government, Sir Gordon Drummond is best remembered for his conduct during the WAR OF 1812. The son of a Scottish paymaster for the forces in Québec, Drummond returned with his family to England in 1776 after the death of his father. He quickly rose through the ranks, entering the British army in 1789, and by March 1794 he had been appointed Lieutenant Colonel, 8th Foot. He saw service in the Netherlands campaigns of 1794-1795, distinguishing himself at the Battle of Nijmegen, and then led his regiment during the British re-conquest of Egypt in 1801. He was made a full colonel in 1798.

After garrison and staff duty and service in Jamaica, Drummond returned to Canada a brigadier general in July 1808 under the command of General Sir James Henry Craig, commander of the forces in British North America. He reached the rank of lieutenant general in 1811 and briefly served in Northern Ireland before returning to Kingston and taking command of the forces of Upper Canada on 3 December from Francis de ROTTENBURG. It was a desperate time: the Detroit and Niagara frontiers had been wrested from British control; defeats at MORAVIANTOWN and on LAKE ERIE had forced evacuations. Shortages of food compounded civilian and military dislike of the war. War protests, and support for the enemy, grew.

Drummond ordered an advance on the weakening American troops at FORT GEORGE, forcing the Americans to retreat. In response, they burned Newark to the ground on 10 December. Drummond arrived in person on 16 December and immediately ordered an attack on Fort Niagara, New York. Troops rushed across the river and stormed the fort on the 19th, capturing more than 300 Americans and vast stores of needed supplies. The forces under British Major General Phineas RIALL crossed the river the following day and in the wake of operations the town of Lewiston was ruined. Riall followed up with more raids, chasing American militia, and razed the town of Black Rock (Buffalo) in reprisal for the destruction of Newark. Drummond's aggressive, short and decisive campaign restored control of the Niagara front to the British.

Drummond was also critical of the politics of Upper Canada, supporting the passage of tough legislature against American sympathizers, including the suspension of habeus corpus for those accused of aiding and abetting the enemy. Trials, prison terms and hangings increased for enemy sympathizers. He repealed the unpopular martial law on certain farm districts. But when he found that hoarding continued, he evoked martial law in the entire province to battle the food shortages. Drummond maintained martial law as an unavoidable necessity.

In planning the campaigns of 1814, Drummond, along with Sir George PREVOST and Sir James Lucas YEO, believed that control of Lake Ontario was paramount to British victory. This victory required destroying American ship building capacity. An attack on SACKETS HARBOR, NY, the main American ship building facility on the lakes, was essential. Drummond drew up plans, but Prevost continually refused Drummond's request for reinforcements from Lower Canada. As a result, the less defended depot at Oswego, NY, was the target, where supplies for Sackets Harbor could be destroyed. Drummond led the assault himself on 6 May. Initially a success, the raid failed to destroy the material bound for Sackets Harbor; the Americans and their material made their escape by water. Yeo dispatched gunboats to destroy them, but these boats were defeated and captured at Sandy Creek, NY, 30 May 1814.

Desperate and on the defensive, Drummond was confronted with the threat of invasion. American Major General Jacob Jennings Brown crossed the Niagara River with 4000 men, taking Fort Erie. Riall's attempt to stop the American advance guard at CHIPPAWA failed. As the Americans waited two weeks for delivery of the artillery necessary for a decisive blow against either Fort George or Fort Niagara, Drummond summoned reinforcements to the frontier from York and Kingston, and sailed from York to lead the assault against Brown. On 25 July the forces clashed at the Battle of LUNDY'S LANE, near Niagara Falls. Brown had received reinforcements and commanded 3000 men, while Drummond held on to 2800. A violent slogging match ensued until the Americans abandoned Fort Erie. Each side suffered more than 850 casualties, making Lundy's Lane the bloodiest battle fought on Canadian soil. Brown, who was wounded, handed command to Brigadier General Eleazar Wheelock Ripley, who led the American retreat to Fort Erie.

In early August, with the Americans making camp in a quickly built fortification, Drummond ordered a raid on the American supply depots at Black Rock and Buffalo, but the raiders were discovered. Drummond was forced to lay siege to the US forces, knowing he could not be supported by British naval power: the Americans had wrested away control of the Great Lakes that summer. Drummond carried on, with a battery of four guns, and ran two days of bombardment (13-15 August) before beginning his assault. 1600 men attacked the camp from the south, 1500 from the north. Despite Drummond's daring and well-conceived plan, the American commander, Colonel Edmund Pendelton Gains, had expected an attack and repulsed the southern advance with violent fire. The northern forces broke into the fort and fought hard for hours, but lack of ammunition and follow-on support meant they could not bolster their victory. The explosion of a stock of ammunition killed many British soldiers and the rest retreated to their lines.

It was a daring attack and a brutal failure; 906 British soldiers were lost, compared to a mere 84 Americans. Drummond redoubled his efforts to prepare for the likely American assault from Brown, now in command at Fort Erie. 3000 Americans attacked Drummond's defences 17 September 1814, capturing two batteries before Drummond repulsed the American forces back to Fort Erie, and 609 casualties were sustained. Drummond engaged the American forces in skirmishes throughout the fall, supported by Yeo's forces. The Americans abandoned Fort Erie, blowing it up before retreating. With Prevost being recalled to be held accountable for the BATTLE OF PLATTSBURGH, Drummond was made administrator and commander of the troops in the Canadas. Prevost left Québec without providing any insight into operations to Drummond, who did his best to negotiate the difficult end of the war, from implementing the end of hostilities after the approval of the TREATY OF GHENT, to the debacle of British failure at the BATTLE OF NEW ORLEANS.

Ill health and personal matters ended his political work and Drummond returned to Britain in 1816, where he attained several colonelcies. At the time of his death, he was the senior officer of the British Army. While Drummond's military successes showed pragmatism and persistence, his failures showed a lack of dynamism compared to his opponents. A highly capable officer whose strengths and weaknesses shaped the outcome of the war, Drummond was an instrumental figure in the conduct of the War of 1812. 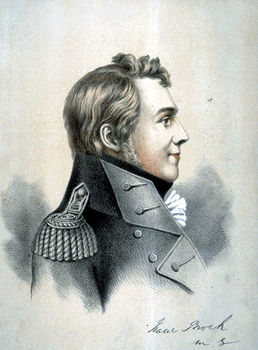 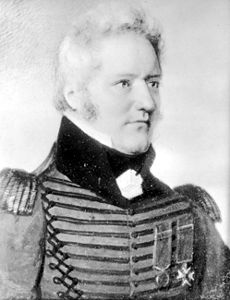