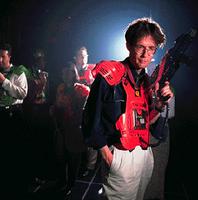 Science fiction is the branch of literature that deals with plausible alternative realities. Most SF explores visions of the future logically extrapolated from what we know about the present, or deals with the impact on societies or individuals of technologies logically derived from our current scientific knowledge.

SF was invented in Great Britain. Most critics cite Mary Shelley's 1818 novel Frankenstein as the first true work of SF, and H.G. Wells (1866-1946) as its most influential early practitioner. It became a commercial publishing category in the United States, starting with the founding of the first SF magazine, Amazing Stories, in 1926. Canadians have come to the genre only recently and in small numbers, but their contributions have been significant.

The membrane between the two solitudes is semi-permeable. Those who write principally for American markets have no trouble making the occasional sale in Canada, but those whose work has appeared primarily in Canadian publications rarely, if ever, cross over to international publication. That the crossover only works in one direction is attributed variously to differences in the relative standards of the two marketplaces (Canada has no domestic short-fiction markets that meet the Science Fiction and Fantasy Writers of America's minimum requirement for professional payment), or to some ineffable Canadian "voice" that is not received well internationally.

This latter position is hard to justify, since the SF by Canadian authors published in American venues often bears the traditional hallmarks of Canadian literature. The principal Can-Lit theme (as outlined by Margaret Atwood in her non-fiction book SURVIVAL, 1972) is the relationship of society to its landscape: the Canadian psyche is indelibly stamped by living in a vast, sparsely populated, inhospitable land that will kill you if you simply stand still. Canadian SF novels such as Donald Kingsbury's Courtship Rite (1982), Teresa Plowright's Dreams of an Unseen Planet (1986), Andrew Weiner's Station Gehenna (1987), and Robert J. Sawyer's Far-Seer (1992) all embody this theme.

Artificial intelligence is also a popular theme in Canadian SF, beginning with The Adolescence of P-1 by Thomas J. Ryan (1977) and further explored in William Gibson's Neuromancer (which coined the term "cyberspace") and A. K. Dewdney's Planiverse (both 1984), Golden Fleece and Factoring Humanity by Robert J. Sawyer (1990 and 1998, respectively), and Chris Atack's Project Maldon (1997).

Critic John Robert COLOMBO identifies a third pervasive theme, "the national disaster scenario" - stories about Canada being destroyed by natural catastrophes or political strife. Representative works include Basil Jackson's Epicenter (1971) and the novels of Richard ROHMER, although such works are more often classified as thrillers or mainstream, rather than SF.

SF set in whole or in part in a land that is identifiably present-day or near-future Canada is a rare commodity, although Canadian settings are common in fantasy novels, particularly those of Charles de Lint and Tanya Huff. Perhaps the best examples are the SF/crime-fiction crossovers Barking Dogs (1988) and its sequel Blue Limbo (1997) by Terence M. Green and The Terminal Experiment by Robert J. Sawyer (1995). Identifiable Canadian locales also appear in some of the short fiction of Andrew Weiner and in the novels and short stories of Spider Robinson, who often draws upon Nova Scotia, where he used to live, and British Columbia, where he currently lives.

The vast majority of Canadian SF writers are immigrants to Canada: of all those working regularly over a period of years in adult SF at novel length, only Phyllis GOTLIEB (born in Toronto in 1926), Terence M. Green (Toronto, 1947), and Robert J. Sawyer (Ottawa, 1960) are native-born Canadians. Everyone else has come from abroad: Donald Kingsbury and Robert Charles Wilson from California; William Gibson from South Carolina; Spider Robinson and the late Judith Merril from New York; J. Brian Clarke, Michael Coney, Dave Duncan (principally a fantasy writer) and Andrew Weiner from England; Charles de Lint (mostly a fantasist, but occasionally an SF writer) from the Netherlands; Élisabeth Vonarburg from France; and Nalo Hopkinson from Jamaica.

SF writers born in Canada who moved to the United States include Gordon R. Dickson, Horace L. Gold, Garfield and Judith Reeves-Stevens, Joel Rosenberg, and A. E. van Vogt (who received the Science Fiction and Fantasy Writers of America's Grand Master Award in 1996). Of those, only Gar Reeves-Stevens and van Vogt did significant work while still in Canada: van Vogt wrote "Black Destroyer," his "Weapon Shops" stories and Slan in Manitoba and Ontario; Reeves-Stevens produced Children of the Shroud and Night Eyes in Ontario. Another notable expatriate, Governor-General's Award winner Heather Spears, author of the Canadian-published SF novels Moonfall and The Children of Atwar, now lives in Denmark.

Significant French-Canadian writers include Joël Champetier, Denis Coté, Yves Meynard, Esther Rochon, Daniel Sernine and Élisabeth Vonarburg; only Vonarburg's works have been widely translated into English, including the related feminist novels The Silent City (1982) and The Maerlande Chronicles (1992). However, in 1998 the leading American SF publisher Tor Books released The Book of Knights, a fantasy novel by Meynard that he had written in English.

The Canadian literary establishment does not perceive genre barriers the same way Americans do, so it is not unusual for a mainstream Canadian author to try his or her hand at SF, often with great success. Bestselling writers who have done so include Margaret ATWOOD (whose feminist The Handmaid's Tale (1985) was a finalist for the Science Fiction and Fantasy Writers of America's Nebula Award), Hugh MACLENNAN (the post-nuclear-holocaust Voices in Time, 1980), Brian MOORE (Catholics, 1972) and Charles Templeton (World of One, 1988).

Canada has had several small-press SF magazines over the years, but the most successful by far have been the English-language On Spec: The Canadian Magazine of Speculative Writing (founded 1989; re-subtitled "More Than Just Science Fiction!" in 1997), and the French-language Solaris (founded 1974) and imagine... (founded 1979).

Canada has also had several important SF anthologies. The first was Other Canadas (1979), edited by John Robert Colombo, a reprint historical retrospective. Also significant are Visions from the Edge: Atlantic Canadian Science Fiction (1981), edited by Lesley Choyce and John Bell; Ark of Ice: Canadian Futurefiction (1992), edited by Choyce; and Arrowdreams (1998), an alternative-history anthology edited by Mark Shainblum and John Dupuis. Most successful of all, though, have been the Tesseracts series of anthologies, containing mostly new material: Tesseracts (1985), edited by Judith Merril; Tesseracts 2 (1987), edited by Phyllis Gotlieb and Douglas Barbour; Tesseracts 3 (1990), edited by Candas Jane Dorsey and Gerry Truscott; Tesseracts 4 (1992), edited by Lorna Toolis and Michael Skeet; Tesseracts 5 (1996), edited by Yves Meynard and Robert Runté; Tesseracts 6 (1997), edited by Robert J. Sawyer and Carolyn Clink; and Tesseracts 7 (1998), edited by Paula Johanson and Jean-Louis Trudel. The companion anthology Tesseracts Q (1996), edited by Élisabeth Vonarburg and Jane Brierley, consists solely of French-Canadian SF translated into English, although all volumes in the series contain a few such stories. Significant, too, is the American-published reprint anthology Northern Stars: The Canadian Science Fiction Anthology (1994), edited by David G. Hartwell in New York and Glenn Grant in Montréal.

There have been several single-author short-story collections from Canadian publishers, beginning with North by 2000 by H. A. Hargreaves (1976). Other notable volumes include Melancholy Elephants by Spider Robinson (1984); The Woman Who is the Midnight Wind by Terence M. Green (1987); Machine Sex and Other Stories by Candas Jane Dorsey (1988); Distant Signals and Other Stories by Andrew Weiner (1989); Blue Apes by Phyllis Gotlieb (1995); and Death Drives a Semi, collecting horror, fantasy, and SF stories by the prolific Edo van Belkom (1998).

Canada's principal English-language SF book publisher is the small-press Tesseract Books of Edmonton; much Francophone SF has been published by Québec/Amérique, a mainstream publishing house. Only occasionally will a mainstream English-Canadian publisher take a foray into SF. The most notable attempts have been Penguin Canada's release of Robinson's Melancholy Elephants and McClelland & Stewart's publication of Terence M. Green's second novel, the time-travel story Children of the Rainbow (1992).

The principal non-fiction references are Canadian Science Fiction and Fantasy by David Ketterer (perhaps significantly, published in the U.S. by Indiana University Press in 1992); Out of this World: Canadian Science Fiction & Fantasy Literature, a collection of essays edited by Andrea Paradis for the National Library of Canada (1995); and Northern Dreamers, a collection of author interviews conducted by Edo van Belkom (1998). Also important is the special March 1993 "Speculative Fiction" issue of Books in Canada magazine. For many years, the scholarly journal Science-Fiction Studies was published at Québec's Concordia University, but it showed no particular Canadian slant.

Attempts have been made to classify the output of Canadian SF writers. Ketterer went so far as to say that Canadians don't write "hard" (technologically oriented, scientifically rigorous) SF, the output of Chris Atack, J. Brian Clarke (whose stories, six of which were combined into the novel The Expediter (1990), were a mainstay of Analog, the leading American hard-SF magazine), Julie E. Czerneda, Phyllis Gotlieb, Donald Kingsbury and Robert J. Sawyer notwithstanding. In fact, it's hard to find any type of SF Canadians don't write. Robert Charles Wilson's Mysterium (1994) and Darwinia (1998) are alternative-history stories; Phyllis Gotlieb writes of far-flung galactic empires; Spider Robinson writes both hard and humorous SF; James Alan Gardner does humorous SF as well; Terence M. Green's work is often termed "literary science fiction"; Scott Mackay has been likened to the romantic American SF writer Theodore Sturgeon; and William Gibson was the father of Cyberpunk, with his seminal 1984 novel Neuromancer.

Prior to the 1980s, there was very little Canadian SF; Phyllis Gotlieb was the sole practitioner of the art in English Canada between the 1960s and the late 1970s. She continues to write: her most-recent novel, Flesh and Gold, was published in 1998.

Going back further, the oldest significant Canadian speculative work was the utopian satire A Strange Manuscript Found in a Copper Cylinder (1888) by James De Mille. Also noteworthy are chapters 11 through 13 of Charles H. Sternberg's 1917 book Hunting Dinosaurs in the Badlands of the Red Deer River, Alberta Canada. Although the book is non-fiction, these three chapters compose a legitimate SF time-travel novella set in Canada; Sternberg (1850-1943), an American, was in the employ of the Canadian government for several years as a fossil hunter. Canada's premier humorist, Stephen LEACOCK, also tried his hand at satiric SF with The Iron Man and the Tin Woman with Other Such Futurities (1929) and Afternoons in Utopia (1932). Also significant, again as satire, is Consider Her Ways (1947) by Frederick Philip GROVE.

Since 1980, the principal Canadian literary award for SF has been the Canadian Science Fiction and Fantasy Award (the Aurora), voted on by readers coast to coast. Six professional awards are given each year for best long-form, short-form, and "other" (usually a magazine or anthology) work in both English and French. Recent winners of English long-form Aurora Awards are Virtual Light by William Gibson (1995), The Terminal Experiment by Robert J. Sawyer (1996) and Starplex by Robert J. Sawyer (1997). Recent winners of French long-form Auroras are La Mémoire du lac by Joël Champetier (1995), Les Voyageurs malgré eux by Élisabeth Vonarburg (1996) and La Rose du désert by Yves Meynard (1997).

The following Canadian works have won Hugo Awards (SF's international readers' choice awards): "By Any Other Name" (novella, 1977) by Spider Robinson; "Stardance" (novella, 1978) by Spider and Jeanne Robinson; "Melancholy Elephants" (short story, 1983) by Spider Robinson; and Neuromancer (novel, 1985) by William Gibson. And the following Canadian works have won Nebula Awards (the "Academy Award" of SF, given by the Science Fiction and Fantasy Writers of America): the novels Neuromancer by Gibson and The Terminal Experiment by Robert J. Sawyer, and the novella "Stardance" by the Robinsons.

The principal Canadian SF reference library is The Merril Collection of Science Fiction, Speculation and Fantasy (known until 1990 as The Spaced Out Library), founded in 1969 by expatriate American SF editor Judith Merril, and long part of the Toronto Public Library system. In 1997, Space: The Imagination Station, a Toronto-based cable-TV specialty channel devoted to SF, debuted; with its "Space News" and "Space Opinion" segments between programs, it does much to spotlight Canadian SF writers and their works.