The City of Sarnia is located at the convergence of the St. Clair River and Lake Huron , 100 km west of London. A railway tunnel beneath the St. Clair and a highway bridge from nearby Point Edward connect Sarnia with Port Huron, Michigan. Sarnia is a major centre for the petrochemical industry and the southern terminus of an oil pipeline from Alberta . It was also the home of Alexander Mackenzie, first Liberal prime minister of Canada.

Since the early 19th century, the Sarnia region has been populated by the Anishinaabe people, who inhabit the modern-day Aamjiwnaang Reserve at the southern end of the city.

Prior to the Anishinaabe, the Tionontati (also known as the Petun) wrested the region from the Sauk in the early 17th century. The Tionontati were allies of the Council of Three Fires, which included the Potawatomi, the Odawa and the Anishinaabe. The land changed hands again in the mid-17th century, passing over to the Mohawk and Seneca of the Haudenosaunee Confederacy after a territorial dispute.

French traders and explorers began visiting the area in 1669. In the late 1680s, the colonial government established a fort in what is now Port Huron, Michigan, directly across the river from Sarnia. The French had much stronger relations with the Anishinaabe than the Haudenosaunee, and in the final decades of the century they jointly attacked the Haudenosaunee. These skirmishes succeeded in bringing the land under the control of the Anishinaabe and their allies in the Council of Three Fires in 1701— the same year the French colonial commander, Antoine Cadillac, established a fort at nearby Detroit.

Throughout the subsequent decades, the Anishinaabe prospered tremendously by trading with the French, and their population grew substantially, from around 3,000 in 1700 to over 10,000 by the 1770s.

The Anishinaabe began to lose control of the territory in the final decades of the 18th century when their French trading partners were unseated by the British in the Seven Years’ War (1756–63). Then, after remaining relatively neutral in the American War of Independence, the Anishinaabe became increasingly vulnerable as both British and American settlers encroached on their lands, disrupting trade routes and spreading smallpox in the process (see also Epidemics). The first land treaties they signed were with the Americans: the treaties of Greenville and Detroit in 1795 and 1807, respectively.

In 1827, they signed Treaty 29 with the British Crown, which established the modern reserve of the Aamjiwnaang First Nation.

Shortly thereafter a British settler community formed, called The Rapids until 1836 when it was named Port Sarnia. Sir John Colborne is said to have named the township Sarnia because it is the Latin name for Guernsey — an island in the English Channel — where he had been governor before his appointment to Canada. "Port" was dropped from the name when it was incorporated as a town in 1856.

In 1858, the Great Western Railway extended its line from London to Sarnia and ran ferries across the St. Clair. The Grand Trunk Railway put a line into Point Edward in 1859. When the St. Clair Tunnel opened in 1891, the car ferries stopped running for some years, and Point Edward declined as a rail centre.

Primitive oil refining started in Sarnia after the first commercial oil well on the continent went into production in 1858 at Oil Springs, 36 km southeast. In 1898, Imperial Oil Company moved to Sarnia from Petrolia, 26 km southeast, and built a refinery.

The most important event in establishing Sarnia as a centre of petrochemical development came during the Second World War. After the Japanese military gained control of the world’s primary sources of natural rubber in Southeast Asia, the Allied forces became desperate for a source of synthetic rubber. In response, Canada’s minister of Munitions and Supply, C.D. Howe, ordered the construction of a synthetic rubber plant in Sarnia run by a new Crown corporation, Polymer Corp. At $50 million, this was the largest single wartime project financed by the federal government. Several other petrochemical plants would soon follow.

In 1951, the city annexed part of Sarnia Township. In 1991, Sarnia amalgamated with the town of Clearwater.

The shores of Sarnia Bay, an inlet of the St. Clair River formerly devoted to lumbering and salt wells, were changed by dredging and filling in 1927 to provide for grain elevators. Docks are accessible to the largest ships on the lakes. Most public buildings are recent. 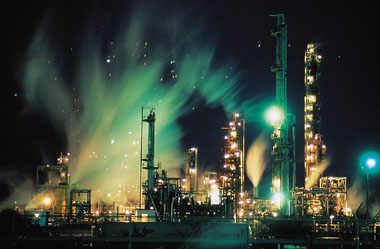 A petro-chemical plant at Sarnia, Ontario.

The area housing much of Sarnia’s petrochemical industry is known as “Chemical Valley.” In recent years medical experts have raised concerns about the industry’s health impacts on workers and local residents. Emissions from the industrial park contribute to Sarnia having the worst air quality of any community in Canada, according to a 2011 World Health Organization report. The environmental NGO Ecojustice has reported that Chemical Valley emits more dangerous pollutants than the entire provinces of Manitoba, New Brunswick or Saskatchewan.

The Aamjiwnaang community, being surrounded on three sides by industry, is especially vulnerable to the medical impacts of the emissions, and its residents report much higher than normal rates of asthma, high blood pressure, chronic headaches, cancer, learning disabilities, skin rashes and miscarriage.

The postwar economy boomed in Sarnia. Throughout the 1970s, the city had the highest standard of living in Canada, with a disposable income 35 per cent higher than the Canadian average. In 1971, the Polymer Corporation’s industrial facility was selected to be on the back of the $10 bill.

The modern petrochemical industry depends on local salt mines, abundant fresh water, the Great Lakes shipping network and an Enbridge-owned pipeline that delivers oil originating in the Alberta oil sands. The municipality is host to facilities owned and operated by Bayer Inc., Shell Canada, Imperial Oil and NOVA Chemicals. Products produced by these companies include gasoline, fuels, components for plastics and textiles, rubber, chemicals and insulation.

Sarnia’s city council consists of the mayor and eight councillors, who are elected once every four years.

The labour movement has played an uncommonly strong role in Sarnia’s postwar cultural history and continues to today, although unions’ memberships have declined. The city is also home to the International Symphony Orchestra, a local orchestra that splits its time between Sarnia and Port Huron. Its main newspaper is the Sarnia Observer. The city’s largest post-secondary educational institution is Lambton College, which specializes in applied arts and technology.