Marguerite Bourgeoys was canonized in 1982 (courtesy Library and Archives Canada/C-12340). 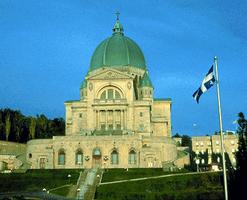 The first North Americans to be canonized (29 June 1930) in the Catholic church were the five Jesuits killed by Iroquois in intertribal warfare in Huronia in the 1640s: Jean de Brébeuf, Noël Chabanel, Antoine Daniel, Charles Garnier and Gabriel Lalemant. Isaac Jogues, also a Jesuit missionary, and René Goupil and Jean de La Lande, donnés working for the Jesuits, lost their lives on missions to the Mohawk.

All were pronounced martyrs (though they were not put to death for their religious beliefs) and their collective feast day is October 18. The first candidate for sainthood born in Canada was Marie-Marguerite d'Youville (1701-71, canonized 9 December 1990), founder of the Grey Nuns.

Canonization is often a lengthy process. It begins only after death and after there is popular urging that a person be declared a saint. Such popular pressure, for example, exists for Georges-Philéas Vanier (1888-1967), a former governor general of Canada. The next step in the process is taken by a local bishop, who formally initiates the cause and appoints someone to see to it that testimony concerning the candidate's life and holiness is carefully and exhaustively compiled.

The goal is to prove that the person lived a life of heroic virtue or died a martyr's death, and a case both for and against is prepared, presented and judged. If the result is favourable, "the cause is introduced in Rome"; that is, the evidence is evaluated by the Sacred Congregation for the Causes of Saints, who may then declare the candidate to be "Venerable."

The beatification ceremony declares the candidate to be in heaven, bestows the title "Blessed" and authorizes public veneration of him in the country or countries where he lived. Canonization and the title of "Saint" comes after two more miracles have been verified (and again one may be waived); a canonized saint may be publicly venerated anywhere in the world.

By the mid-1980s causes had been introduced in Rome for 10 others, of whom one, Bishop Vital Justin Grandin of St Albert (1829-1902) has been declared venerable. Also from the Edmonton area was Brother Anthony Kowalczyk OMI (1866-1947); from The Pas, Man, Bishop Ovide Charlebois (1862-1933), apostolic vicar of Keewatin. From Montréal were those of Mother Émilie Gamelin (1800-51), founder of the Soeurs de la Providence; Jeanne Mance (1606-73), a driving force in the founding of Ville-Marie; and Mother Marie-Anne, (née Marie-Esther Sureau, dit Blondin) (1809-90) of the Soeurs de Sainte-Anne.

From St-Hyacinthe, Qué, was the cause of Élisabeth Bergeron (1851-1936) of the Soeurs de St-Joseph and Bishop Louis Zépherin Moreau of St-Hyacinthe (1823-1901), and from Trois-Rivières, Father Frédéric Janssoone, OMI (1836-1916). Father Alfred Pampalon, CSsR (1867-96) was from Ste-Anne-de-Beaupré, Qué; and from Québec City is that of Mother Marie-Catherine de St-Augustin, née Catherine de Longpré (1633-68), of the Augustines de la Miséricorde de Jésus.

The act of formally declaring a person to be a saint is not limited to Catholicism; the Orthodox churches also have canonized saints, although none of them are from Canada. There are, however, some Russian Orthodox saints from Alaska canonized by the Orthodox Church of America; these include Herman of Alaska (1760-1837) and a native, Peter the Aleut (d 1816).