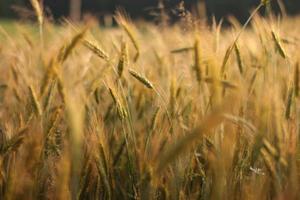 Rye is the common name for members of the genus Secale of the grass family (Poaceae, formerly Gramineae) and for the cereal grains produced by those grasses. Rye is second only to wheat as the grain used for the production of bread; it is the only cereal other than wheat from which leavened bread can be made. Both annual and perennial forms exist, but only one species, S. cereale, is of economic importance, ranking eighth among the world's major cereal grain crops. Winter rye, sown in early fall, is far more common than spring rye.

The main producers of rye are the EU-27, Russia, Belarus and Ukraine, which produce 53, 25, 9 and 5% of world production, respectively. Canada produces about 2% and the United States about 1% of world production of rye grain. About 50% of Canadian rye production is exported mostly as grain and trace amounts of rye products. On average about 30% is used in the domestic feed market, 7.5% is used by the brewing and malting industry, 5% is used in bread and breakfast food products and 5% is used for seed.

Rye probably originated in Asia Minor and spread throughout Europe as a contaminant of wheat, which it resembles. It was brought to North America by European immigrants. Additional introductions were made in the late 19th and 20th centuries by government agencies in programs to develop cultivars adapted to Canadian conditions.

Rye grain is borne on a terminal spike 10-15 cm long. The alternately arranged spikelets produce 2 kernels. Kernels are generally greenish blue in colour but can range from light tan to dark brown, depending on the cultivar. In North America, rye is used primarily as an animal feed. In the semiarid prairies, much of the crop is often grazed or harvested as emergency fodder for livestock. Whole rye-meal baked goods are among the best sources of dietary fibre for the human diet.

The most serious plant disease of rye is ergot [caused by Claviceps purpurea (Fr.) Tul.]. The alkaloids present in ergot can cause abortion and gangrene in mammals, thus caution should be exercised when feeding rye containing ergot. In recent years, fusarium head blight {caused by Fusarium graminearum Schwabe, Group II [teleomorph Gibberella zeae (Schwein) Petch]} has become a serious disease of rye. It produces a mycotoxin, deoxynivalenol, which can cause animals to refuse feed and lose weight.

Physiologically, rye is the hardiest of all cereal crops and is important in areas subject to low temperature and drought stresses like the semiarid regions of the Canadian prairies where it is used to control soil erosion on light mineral soils. Rye is more tolerant than other cereal grains of acidic soils that contain high levels of soluble aluminum.