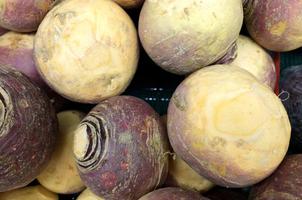 Rutabaga (Brassica napus, Napobrassica Group), herbaceous biennial vegetable belonging to the Cruciferae family and grown as a root crop in all provinces. Rutabaga has many other names, eg, chou de Siam in French and Swede turnip in English. The rutabaga originated in northern Europe and was introduced to N America around 1805.

Related to the turnip, rutabagas differ in the root (round, elongated), flesh (thick, yellow) and foliage (broad, smooth, down covered). Cultivars (commercial varieties) include Laurentian and one of its offshoots, the York, which is immune to most strains of clubroot.