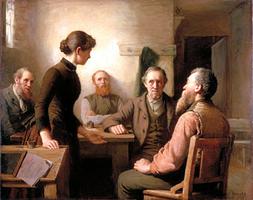 Robert Harris, artist and teacher (born 18 September 1849 in Vale of Conway, Wales; died 27 February 1919 in Montréal, QC). Robert Harris is best known for his painting The Fathers of Confederation, which was burned in the fire that destroyed the Parliament Buildings in Ottawa in 1916. He was Canada’s most famous portrait painter, painting the country’s political, business and social elite.

Robert Harris immigrated to Charlottetown, Prince Edward Island with his family in 1856, including his brother, the architect William Critchlow Harris. In Charlottetown, he attended Prince of Wales College. Harris was obsessed with drawing from an early age, copying from magazine illustrations. His mother was supportive of his interests and arranged to have painting materials sent from Liverpool, England. While Harris received a solid musical education in Charlottetown (he learned to play flute and violin), he thought that in order to develop as a visual artist, he needed to leave Prince Edward Island and spend time in Liverpool, where he could live with his mother’s relatives. In order to fund his trip, in 1864 he went to work for Charlottetown surveyor Henry Jones Cundall, and by 1867 he was on his way to Liverpool.

In Liverpool, where he stayed for three months, he spent at least two days a week sketching in the public library and museum, where there were substantial natural history displays and collections of both ancient and modern sculpture. Harris remained committed to drawing from casts throughout his life in part because it promotes a realistic, and anatomically accurate, depiction of the human body. By the time he returned to Charlottetown, Harrris was already determined to be a portrait painter.

By the fall of 1872, Harrris had commissions to paint portraits of the speakers of Prince Edward Island’s House of Assembly as well as William Garvie, the commissioner of Public Works and Mines in Nova Scotia. In January of 1873, Harris moved to Boston, Massachusetts, where he remained for two years. In Boston, he spent time drawing views of the city and the rich array of objects in the Museum of Fine Arts, some of which were reprinted in Halifax newspapers. He was also able to draw from life at the Lowell Institute and took a course in art anatomy with Dr. William Rimmer, an American artist originally from Liverpool who had arrived in Massachusetts by way of Nova Scotia. Continuing to paint a steady stream of portraits, in 1876 he was able to study in London, England, where he enrolled in the Slade School of Fine Art, attended the Heatherly School of Fine Art, and was a visitor at the Royal Colonial Institute. In 1877, he was also able to spend time in Paris, working with a group of young painters at the Atelier Bonnat under Léon Bonnat, a prominent academic painter of historical scenes. Back in Charlttetown in January 1879, he quickly recognized the impossibility of launching a career as a portrait painter in Prince Edward Island, and by the fall he had moved to Toronto.

Settled in Toronto, Harris established a relationship with Lucius O’Brien, then vice president of the Ontario Society of Artists, and by 1880, on O’Brien’s recommendation, Lord Lorne had nominated him as a founding member of the Canadian (now Royal Canadian) Academy of Arts. Commissions and other projects came quickly. He painted the portrait of Reverend George Whitaker, provost of Trinity College (later part of the University of Toronto), and was asked by the editor of Toronto’s Globe (later the Globe and Mail), John Gordon Brown, to travel to Lucan, Ontario and make illustrations of the men accused of murdering James Donnelly and his family. He also provided illustrations of O’Brien’s book project, Picturesque Canada.

Now enjoying relative financial stability, in 1881 Harris undertook another trip to Europe, this time to England, France and Italy, and it was during this trip that he would hear word of what would be his most important commission, a painting commemorating the Fathers of Confederation. Back in Canada, by 1883 negotiations were completed for a painting of the Charlottetown Conference, though the location was later changed to the conference in Québec. He began research for the project by sending out questionnaires to the 33 delegates at the conference (he got 20 replies), and also by consulting photographs taken by William Notman and his firm and by William James Topley, who ran a branch of Notman’s firm in Ottawa. Working in Montréal, Harris completed Meeting of the Delegates of British North America to Settle the Terms of Confederation, Quebec, October 1864 almost 20 years after the event. It was hung in the railway committee room of the Parliament buildings in Ottawa. It was included in an exhibition of Canadian art in Liverpool, England in 1910, and was destroyed in the fire that gutted the Parliament buildings in 1916.

Over the course of the remainder of his life, Harris painted over 200 portraits of distinguished Canadians, including portraits of Thomas Workman, Sir Hugh Allan, Sir John A. Macdonald, George Monro Grant and Lord Aberdeen (John Campbell Gordon). He also painted more dramatic canvases, such as A Meeting of the School Trustees (1885) in which a young female teacher appears to be arguing with much older school trustees, and the lovely and intimate Harmony (1886), a picture of a woman in half profile playing piano. A teacher at the Art Association of Montreal and lecturer at other organizations, he was one of the first advocates for the distinctiveness of Canadian Art. Elected president of the Royal Canadian Academy in 1893, he worked for 13 years to promote young Canadian artists by having them represented at all major international exhibitions of the period. Also in 1893, he organized the Canadian collection for the Columbian exposition in Chicago.

Two of Robert Harris’s most popular paintings, A Meeting of the School Trustees and Harmony, are in the National Gallery of Canada. In 1928 his widow built the Robert Harris Memorial Gallery and Library in Charlottetown, PEI. This building was replaced in 1964 by the Confederation Centre and its gallery houses an extensive collection of Harris's work.