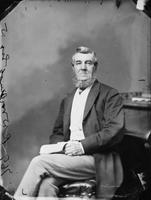 Robert Duncan Wilmot, senator (1867–80), lieutenant-governor of New Brunswick (1880–85), politician, businessman (born 16 October 1809 in Fredericton, NB; died 13 February 1891 in Sunbury County, NB). Robert Duncan Wilmot was a New Brunswick businessman who parlayed his experience as spokesperson for the family business into political office. He served as mayor of Saint John and represented the surrounding county in the Legislative Assembly during the years leading up to Confederation. Originally opposed to Confederation because it didn’t curb provincial powers to his satisfaction, Wilmot moved from sharing power in the anti-Confederation government elected in New Brunswick in 1865 to serving as a delegate to the London Conference in 1866. His conversion was fueled by his reassessment of the 72 Resolutions and a series of personal snubs.

Robert Duncan Wilmot was raised in Saint John, New Brunswick, the son of a merchant and Tory politician. He spent his late 20s in Liverpool, England representing his father’s business interests. Upon his return to New Brunswick, Wilmot was involved in industrial construction and served as a director of the European and North American Railway. He supported efforts to make Saint John the colony’s main city.

First elected to the New Brunswick assembly as the representative for Saint John County and City in October 1846, Wilmot served continuously for the next 15 years. During a concurrent term as mayor of Saint John (1849–50), he was assaulted by a mob while attempting to break up an Orange riot. From early in his political career, Wilmot displayed a talent for switching sides; he campaigned against the Conservative government in 1850, then accepted the post of surveyor general with that party the following year. He was among the opponents of responsible government, voting against several measures to introduce a ballot system. Whenever the topic of uniting the Maritime colonies arose, Wilmot preferred solutions that dissolved the individual legislatures in favour of a strong central government.

In addition to his tenure as surveyor general from 1851 to 1854, Wilmot served as provincial secretary from 1856 to 1857. He retired from colonial politics to pursue farming after losing his seat in the 1861 election.

Robert Duncan Wilmot returned to the New Brunswick Legislative Assembly in March 1865 via an election won by anti-Confederation candidates opposed to Premier Samuel Leonard Tilley’s government. As with Maritime union, Wilmot believed the framework established by the Québec Resolutions had created a weak central government. While most of his fellow New Brunswick anti-Confederates, such as Albert James Smith, pushed for more provincial powers, Wilmot wanted to strip the Legislatures of their authority.

In 1865, Lieutenant-Governor Arthur Hamilton Gordon called on Smith and Wilmot to form a new administration. With Smith as the senior leader, the government quickly deteriorated; its members divided over issues ranging from patronage to railway policies.

While attending a trade conference in Québec in September 1865 to discuss the repercussions of the end of Canada’s reciprocity treaty with the United States, Wilmot’s stance on Confederation began to shift. While at the conference, Wilmot realized that the French majority in Canada East would never accept a highly centralized government, and that, with no new reciprocity deal forthcoming, a union would assist the creation of new markets. “He had succumbed to the witchery of the Canadians,” historian W.S. MacNutt observed.

Wilmot’s conversion was accelerated by a series of perceived snubs by his government colleagues in New Brunswick. He eyed the post of auditor general until the Legislature reduced the position’s annual salary by $400. He was upset when his cousin Lemuel Allan Wilmot, the senior judge in the colony, was passed over as chief justice in favour of William Johnstone Ritchie. When Wilmot attempted to resign, Lieutenant-Governor Gordon urged him to stay on. Gordon believed that Wilmot’s shifting views provided the pro-Confederation wedge that would further destabilize the government.

Despite his recent role in the Québec trade talks, Wilmot’s final break with Smith came after Wilmot was excluded from New Brunswick’s delegation to trade talks in Washington, DC, in February 1866. When Wilmot resigned, Gordon forced Smith to accept union in order to remain in power, or else Wilmot or other pro-Confederates would replace him.

Smith’s government collapsed in April 1866. Under the new administration of Peter Mitchell, Wilmot was one of the delegates who attended the London Conference in December 1866 to set the final terms for Confederation.

On 23 October 1867, Robert Duncan Wilmot was appointed to sit as one of Canada’s first senators. He became speaker of the Senate on 8 November 1878, the same year he was appointed by Sir John A. Macdonald as a minister without portfolio. Wilmot resigned from the Senate on 10 February 1880 to become lieutenant-governor of New Brunswick, a position he held for five years

By overcoming his initial concerns about the role of the central government in a new union, Wilmot played a role in destabilizing the anti-Confederation government he co-led, and aided New Brunswick’s entry into the new union.