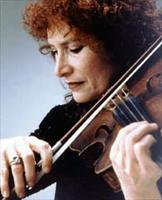 Golani's contributions to the advancement of viola technique have given her a place in the history of the viola. More than 200 pieces have been written for her, of which 39 are concertos, a record matched by no other violist in history.

Rivka Golani (formerly m Erdesz). Violist, visual artist (born 22 March 1946 in Tel Aviv, Israel; naturalized Canadian 1983). She began violin lessons at seven and became a pupil of Alexander Moskowsky at 18. Switching to the viola at 21, she became a pupil of the composer and violist Oedoen Partos while studying 1965-71 at the Rubin Academy of Music at the University of Tel Aviv. Concurrently with her music studies, Golani began her professional activity as an artist; exhibitions of her drawings were held in Canada, Israel, and Europe. She was a member of the Israel Philharmonic and appeared as a soloist with other orchestras in Israel before moving to Canada in 1974. Golani taught 1978-87 at the University of Toronto and RCMT (and again at the University of Toronto in the 1990s); her pupils included Mary Carol Nugent, Beverley Spotton, and Kent Teeple. In 1987 Golani settled in London with her then husband, the conductor Thomas Sanderling, but she frequently returned to Canada to give concerts. She performed on a viola with a unique cut-away design made by her former husband, the Hungarian-born luthier Otto Erdesz.

Golani appeared widely as a soloist (in recital and with the MSO, NACO, TS, BBC Symphony Orchestra, Boston Symphony Orchestra, Royal Concergebouw, Tokyo Metropolitan Orchestra, and many other orchestras) and on occasion in chamber music performances. At the Promenade concerts in London she played concertos by Walton (1984, Last Night of the Proms), Robin Holloway (1985, the premiere) and Elgar (1990, the Cello Concerto, transcribed by Tertis). In addition to playing the traditional viola literature and some transcriptions, by 2003 Golani had had over 200 works (including at least 39 concertos) written for her. Writing in Musical America (Jan 1985) after the premiere of Colgrass's Chaconne, Robert Markow stated that 'Golani combines flawless intonation, a richly warm tone, technical wizardry, strong projection of musical ideas, and an electrifying stage presence into nothing less than a musical dynamo.'

Golani lived in both London and Toronto. She performed as a member of the Eden Trio (with Andrew Dawes and violinist Yehuda Hanani), and with the chamber ensemble Octagon, with whom she toured in Canada. She also toured with the Esprit Orchestra, and as a soloist performed frequently in the UK, Europe, and Israel. A sought-after recording artist, she recorded with Cadenza, Fontec, Conifer, Centrediscs, Chandos, Helicon, Musica Viva, Naxos, and other labels. CBC radio broadcast a feature on Golani in 1998.

Golani had works written for her by Heinz Holliger, Joji Yuasa, Bernd Alois Zimmermann, and other composers in Europe, Russia and Israel, in addition to the Canadian works listed below. For her contributions to Canadian music, Golani was named a Canadian Music Centre ambassador in 2009.

Evangelista Concerto for Viola and Orchestra, 2002

Kenins Concerto for Viola and Orchestra

Schafer Concerto for Viola and Orchestra

Birds of Another Feather... My Musical Colleagues (Oakville, Ont 1985)

Rubbra Concerto in A for viola and orchestra. Little violin. 1994. Conifer CDCF 225