The justice of the peace of Sherbrooke, Québec instructs the citizens of Asbestos to remain in their homes or at their place of work. The police had the right to arrest anyone disobeying the order (courtesy Le Soleil). 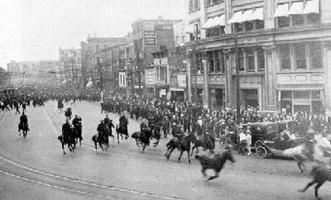 Section 64 of the Criminal Code defines "riot" as an "unlawful assembly" that has begun to disturb the peace "tumultuously." The term "tumultuously" has been interpreted to entail some element of force or violence manifested by menaces or threats. An "unlawful assembly" occurs when 3 or more persons with intent to carry out any common purpose assemble in such a manner or so conduct themselves as to cause persons in the neighbourhood of the assembly to fear, on reasonable grounds, that the persons assembled or others reacting to the assembly will disturb the peace tumultuously. Everyone who is a member of an unlawful assembly is guilty of a summary conviction offence. Everyone who takes part in a riot is guilty of an indictable offence and liable to 2 years' imprisonment

Under s67 of the Criminal Code, where a riot involving 12 or more people is in progress, a justice, mayor, sheriff or other designated official is authorized to order the rioters to disperse in the name of the Queen. In popular terms, this is "reading the Riot Act." (The original Riot Act, which contains much the same provisions as s67, was a 1714 English statute passed during the Jacobite rebellion.) The riot proclamation has been used a number of times in Canadian history - for example, in Montréal in 1832 when a riot ensued during a byelection, and in Winnipeg during the WINNIPEG GENERAL STRIKE of 1919.

Many social scientists agree that collective violence of the sort labelled "riot" (or "insurrection") can be conceived of as a collective act of resistance to established authority and perceived injustice (eg, the MONTRÉAL RIOTS of 1849 in which outraged Tories attacked Lord Elgin and set fire to the Parliament Buildings), but others argue that the notion of "riot" is not a legitimate concept but an ideological one used by those in power to denigrate resistance to their authority.

Within the legal system, the term "riot" has a much broader meaning and is not necessarily linked to a notion of resistance to authority or perceived injustice. While the term is often used to describe the behaviour of people who intend to use collective violence to achieve some unlawful aim, it also applies to street parades, boisterous parties or demonstrations that meet the criteria for "unlawful assembly" and disturb the peace tumultuously.