In the early 1600s, Catholic nuns and priests established the first residential schools in Canada. In 1883, these schools began to receive funding from the federal government. That year, the Government of Canada officially authorized the creation of the residential school system. The main goal of the system was to assimilate Indigenous children into white, Christian society. (See also Inuit Experiences at Residential School and Métis Experiences at Residential School .)

In the following years, new schools were built. A total of 130 operated between 1831 and 1996. Over 150,000 First Nations, Métis and Inuit children were forced to attend residential school during this period. Thousands died either at school, or because of their experiences in the system. Many more remain missing.

While experiences varied, many students had negative experiences at school. They were forcibly removed from their homes and separated from their parents at a young age. They were forbidden to wear traditional clothing or participate in ceremony. School staff often used numbers to refer to students instead of their name. The vast majority of children were not allowed to speak their own languages at school.

Abuse was common at the schools. Children were beaten and locked in small spaces by teachers and staff for misbehaving. Numerous students were sexually abused. A large percentage did not receive enough food to eat. Poor living conditions and malnutrition meant many became sick with preventable diseases such as tuberculosis and influenza. 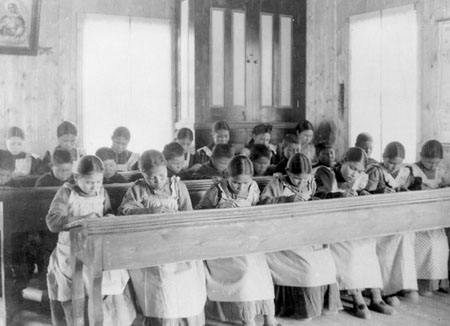 Only a few hours a day were spent in the classroom. Most teachers were unqualified, and the curriculum they taught was basic. Students learned reading and writing in either English or French, basic math, and religion. The schools received little funding from the government, so students were forced to spend half of their day working to maintain school buildings and grow food. Girls cooked, cleaned, sewed and laundered. Boys took part in carpentry, construction and farming. All students had a variety of other daily chores in addition to their work. When they left school, most did not have the skills they needed to find a well-paying job.

Indigenous students and parents protested and resisted against residential schools throughout their operation. In 1969, the churches handed over the administration of the schools to the federal government. The last federally run residential school closed in 1996.

In the 1990s, residential school Survivors began to speak publicly about the abuse they endured at school. They demanded that the federal government and the churches tell the truth about what happened. They also wanted the government to give money (compensation) to Survivors.

In 2008, the federal government formally apologized to residential school Survivors. More apologies followed, from provincial and territorial governments, as well as some churches. Compensation was provided to some — but not all — Survivors. Some of that money was used to create the Truth and Reconciliation Commission (TRC).

Survivors were able to tell their stories during the TRC. In 2015, after six years of work, the commission released a summary report of its findings. It outlined 94 Calls to Action. Prime Minister Justin Trudeau committed to implementing all of them.