There are 376 reserves in Manitoba, held by 63 First Nations. In addition, Animakee Wa Zhing, a First Nation based in Ontario, has a reserve that straddles the Ontario-Manitoba border. As of 2019, there were 162,787 registered Indians in Manitoba, 58 per cent of whom lived on-reserve. Manitoba is also a key part of the Métis Nation’s homeland and has a large Métis population. However, for a variety of historical reasons, Métis do not hold reserves (see Métis Scrip in Canada; Manitoba Act of 1870).

There are 376 reserves in Manitoba, held by 63 First Nations. In addition, Animakee Wa Zhing, a First Nation based in Ontario, has a reserve that straddles the Ontario-Manitoba border. As of 2019, there were 162,787 registered Indians in Manitoba, 58 per cent of whom lived on-reserve. Manitoba is also a key part of the Métis Nation’s homeland and has a large Métis population. However, for a variety of historical reasons, Métis do not hold reserves (see Métis Scrip in Canada; Manitoba Act of 1870).
(Data provided by Crown-Indigenous Relations and Northern Affairs Canada)

Reserves in Manitoba are intergenerational homelands for Ininew (Cree), Anishinaabe (Ojibwe), Oji-Cree, Dakota/Lakota (Sioux) and Dene peoples. The Northlands Dene and Sayisi Dene occupy the northwestern corner of the province. Ininew communities are located to the north and northwest of Lake Winnipeg, Oji-Cree to the northeast, and Anishinaabe communities to the south, from the Ontario to the Saskatchewan border. Dakota and Lakota communities are found in the south central and southwest of the province. Traditionally, First Nations gathered where rivers flowed into or out of large lakes, or where rivers met. Because of this many communities are located at these places. 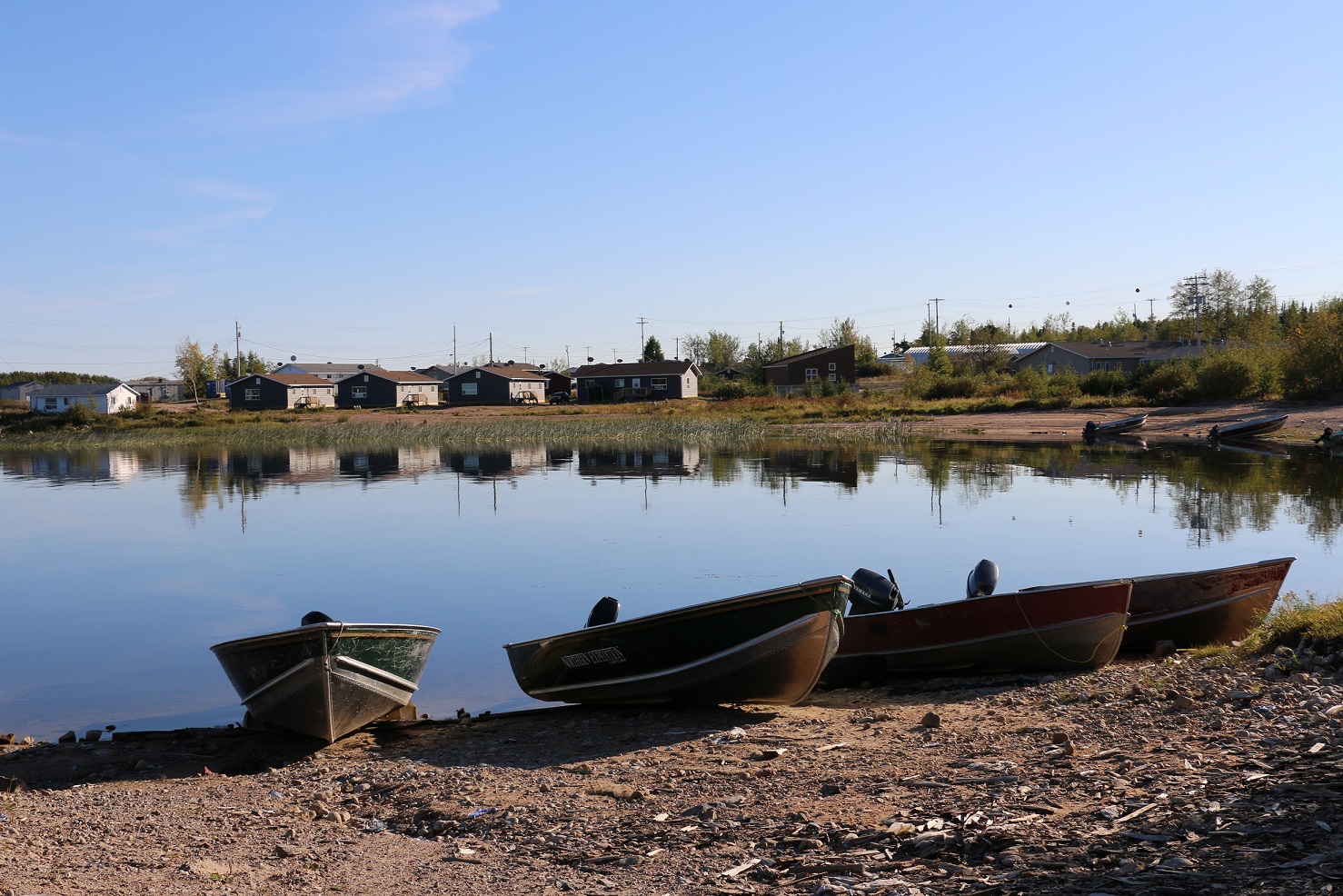 Location is a key factor determining the character of reserves in Manitoba. Reserves located in southern Manitoba are accessible by road and have easier access to Winnipeg. By comparison, in northern Manitoba, 23 communities do not have all-season road access. In the wintertime, these communities rely on winter roads (i.e., roads built on snow and ice) and air transportation to connect them to the south.

Throughout their history, many reserves in Manitoba have been relocated. These relocations took place in order to meet the needs and desires of colonial settlers. For example, in 1908, St. Peter’s Reserve closed. Many families moved about 130 km north of near present-day Selkirk, where the reserve was originally located. St. Peter’s Reserve was an Anishinaabe, Cree and Métis community known today as Peguis First Nation. The land of the reserve’s original location was fertile. In addition, the community had access to fish resources in Lake Winnipeg and was close to the growing city of Winnipeg. For years, the government pressured the reserve to relocate. They allowed non-Indigenous squatters on the land, eventually seizing it and relocating the reserve. In doing so, the government pushed a prosperous farming and fishing First Nation community off its traditional land base. They moved them to a much less productive location in the interest of settler colonial expansion.

In 1956, the Sayisi Dene were relocated from their traditional, non-reserve lands near Little Duck Lake to Churchill. A news photograph showing a number of dead caribou was misinterpreted as a caribou slaughter. Both the provincial and federal governments blamed the Sayisi Dene for a decline in the caribou herd. This was later proved untrue. The community was relocated first to a settlement at North River, 75 km northwest of Churchill. From there they were moved to Camp 10, then to Dene Village, both closer to Churchill. Conditions were appallingly bad. There was acute suffering involving hunger, substance abuse, family violence and death. In the 1970s, the community initiated a movement back to their territory at Tadoule Lake, which eventually gained reserve status.

In the 1960s and 1970s, two communities were relocated as a result of hydroelectric developments. Chemawawin Cree Nation was moved as a result of the Grand Rapids dam, while O-Pipon-Na-Piwin Cree Nation was moved due to the Churchill River Diversion. More recently, flooding in the area between Lake Winnipeg and Lake Manitoba has resulted in people from some First Nations, for example Lake St. Martin First Nation, moving to long-term placements in Winnipeg.

There are many other large reserves in Manitoba, with populations over 1,000. Similarly, seven of the 25 largest First Nations in Canada are found in Manitoba. In addition to Norway House and Pimicikamak, these First Nations are Peguis, Sagkeeng, Sandy Bay, Opaskwayak Cree Nation and Nisichawayasihk Cree Nation. By contrast, isolated First Nations, such as the Sayisi Dene at Tadoule Lake, often have fewer than 500 members living on-reserve.

The majority of reserves in Manitoba were created through provisions in treaties 1, 2, 3, 4, 5, 6 and 10 (see alsoNumbered Treaties). However, the boundaries of treaties 6 and 10 do not fall within the boundaries of Manitoba. Mathias Colomb and Marcel Colomb First Nations are located in the part of Manitoba covered by Treaty 5. Each, though, is a signatory to Treaty 6, which covers much of central Saskatchewan and Alberta. Similarly, Barren Lands First Nation and Northlands Denesuline First Nation are signatories to Treaty 10. The bulk of land covered by Treaty 10 is in Saskatchewan, with a small portion in Alberta. However, Barren Lands and Northlands Denesuline First Nations are also located in the part of Manitoba covered by Treaty 5. The reason these First Nations are signatories to treaties 6 and 10 is that the treaty commissioners for those treaties could more easily travel to them than the commissioners for Manitoba’s other treaties.

Five reserves were created in Manitoba for Dakota/Lakota nations without treaties being involved. The Dakota/Lakota had likely used the territory traditionally, but were fleeing the violence of the Great Sioux War of 1876 in the United States. Having had the territory supposedly cleared of Indigenous title through treaties 1 and 2, Canada did not think it necessary to negotiate a new treaty with the Siouan peoples it considered immigrants. But the federal government did think confining them to reserves was the best way to manage them, in accordance with its overall policy towards “Indians.”

As of 2020, there are 11 urban reserves in Manitoba. An urban reserve is land within or next to an urban municipality that is set aside for a First Nation. For example, Long Plain First Nation has two urban reserves, one within the city of Winnipeg, and one adjacent to Portage la Prairie. Urban reserves may become an increasingly common feature in Manitoba, since many First Nations have a large number of their members living in urban settings. Similarly, First Nation leaders often want to invest money in urban business opportunities. The Kapyong Barracks area of Winnipeg is targeted for what would likely be the largest urban reserve in Canada.

Reserves in Manitoba, like in other provinces, are governed by chiefs and councils. Though most of their responsibilities are similar to those of other Canadian municipalities, First Nation councils also have a broader mandate to advocate for the community in terms of Indigenous and treaty rights. The size of the government and the length of their time in office differs from First Nation to First Nation. In Manitoba, 22 First Nations are governed according to the Indian Act, which provides one chief as well as one councillor for every 100 members of the First Nation. The chief and councillors are elected every two years.

Another 26 First Nations in Manitoba use what the federal government calls a “custom” form of governance. This means that the First Nation has more choice as to what their leadership selection process looks like. Under custom systems, chiefs and councils are often elected for longer terms. For example, Misipawistik Cree Nation’s government is elected for a three-year term as opposed to two. Other nations may not hold elections at all. Buffalo Point First Nation, for example, uses a hereditary system of government, in which the chief governs for their entire lifetime, chooses their own council and eventually, their successor.

Other custom systems are more far-reaching. For example, Pimicikamak Cree Nation has created their own model of self-governance. In 1999, the community established four councils: a women’s council, executive council, elder’s council and youth council. Together these four councils make decisions through consensus.

Finally, the Sioux Valley Dakota Nation in southwestern Manitoba negotiated a self-government agreement with the provincial and federal governments. The agreement passed into law in 2014. It gives the Sioux Valley Dakota Nation the right to establish their own constitution and greater control of the delivery of health, education and other social services.

First Nations, in Manitoba and elsewhere in Canada, often feel attached to specific locations where their ancestors created a good life. Their deep ties to the land help to ground them in their ancient cultures and spiritualities. This attachment to the land is often at odds with colonial Canada’s economy, which demands people be eager to move to where jobs are located.

In addition, mining, forestry and hydroelectric developments have degraded the natural environment in Manitoba and other provinces and territories, making it difficult to practice traditional land-based subsistence. Compounding this are the historical impacts of relocation and residential schools. On-reserve education, health care and material infrastructure (such as clean drinking water and housing) are chronically underfunded. As a result, when compared to non-reserve communities, reserves often have higher suicide, unemployment and incarceration rates. In addition, reserves may have lower levels of educational attainment and greater reliance on social assistance. However, reserve communities may also have stronger connections to their culture, spirituality and language, as well as stronger connections between generations.

Community-driven projects offer contrasting examples of solutions to some of the problems reserves in Manitoba face. A number of Manitoba reserves have developed local and regional economic opportunities. Otineka Mall, an on-reserve shopping centre, was built by the Opaskwayak Cree Nation in the 1970s. The South Beach Casino and Resort at Brokenhead Ojibway Nation is owned by a partnership of seven First Nations. In addition, the Nisichawayasihk, Tataskweyak, York Factory, Fox Lake and War Lake First Nations have recently negotiated large-scale partnership agreements with Manitoba Hydro. Their hope is that the new Wuskwatim and Keeyask dams can become a source of revenue for their communities. 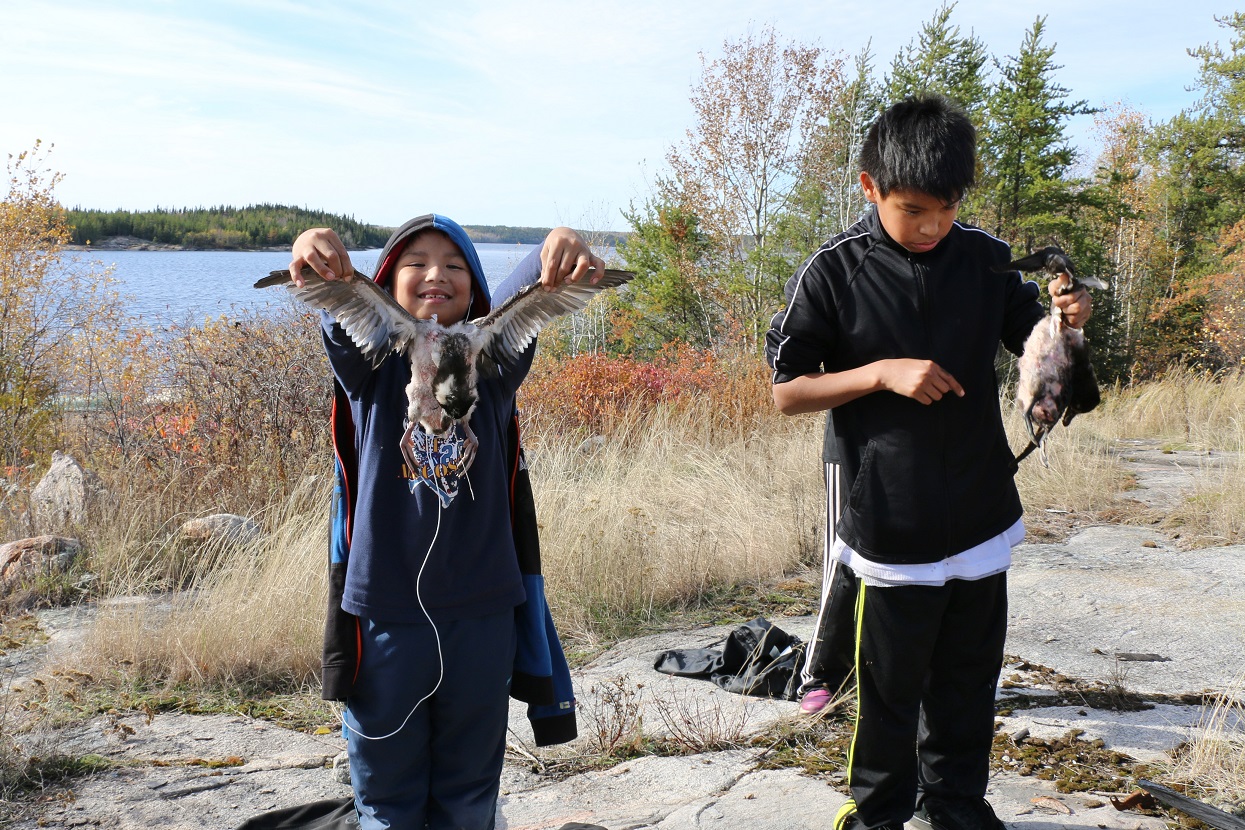 On the east side of Lake Winnipeg four First Nations — Bloodvein River, Little Grand Rapids, Pauingassi and Poplar River — worked together to create a UNESCO World Heritage Site called Pimachiowin Aki, formally recognized in 2018. In addition to protecting their ancestral lands from destruction, these First Nations hope tourism, trapping and fishing can help sustain their communities in a manner that reflects their cultural values. Communities that rely heavily on local fisheries — Berens River, Misipawistik, Kinosao Sipi and O-Pipon-Na-Piwin among others — also lean towards this approach.