Canadians memorialized fallen soldiers on Decoration Day and Paardeberg Day for many years before Remembrance Day was first observed as Armistice Day in 1919.

In 1890, veterans of the Battle of Ridgeway (2 June 1866) held a protest at the Canadian Volunteers Monument at Queen’s Park, in Toronto, by laying flowers at the foot of the monument on the 24th anniversary of the battle. The history of the Battle of Ridgeway was muted in Canadian military heritage and history, and the Canadian government had been reluctant to acknowledge the veterans of the battle.

About 850 Canadian soldiers clashed with some 750 to 800 Irish-American Fenians at Ridgeway. Nine Canadians were killed in action and 33 were wounded (see also Fenian Raids).

The veterans’ protest became an annual memorial event known as Decoration Day, when graves and monuments of Canadian soldiers were decorated in flowers. For the next 30 years, Decoration Day was one of Canada’s popular military memorial days, commemorated on the weekend nearest to 2 June. Remembering Canadians who died in the Battle of Ridgeway soon expanded to those killed during the North-West Resistance (1885), the South African War (1899–1902) and the First World War (1914–18).

Before the First World War, Canadians honoured their overseas war dead on Paardeberg Day — 27 February — the annual anniversary of the Battle of Paardeberg in 1900, during the South African War. The battle was Canada’s first foreign military victory.

From 1901 until the outbreak of the First World War in 1914, people gathered in public squares in cities and towns across the country, around newly built South African War memorials, to commemorate their soldiers’ service in South Africa. Paardeberg Day, however, was less a sombre affair of remembrance than a victory celebration and an affirmation of English Canada’s loyal ties to the British Empire.

The horror and mass slaughter of the First World War (1914–18) changed Canadian perceptions of war. Millions of people were killed at sea and on battlefields across Europe, including 61,000 Canadians. Although Canada fought on the winning side, celebration of victory was replaced by solemn commemoration, and a sense that the country owed a collective national debt to the ordinary soldiers, mostly young men, who had lost their lives in battle.

This debt would be paid, in perpetuity by successive generations, by the simple act of remembering the soldiers’ sacrifice.

In April 1919, after the First World War ended, Member of Parliament (MP) Isaac Pedlow introduced a motion in the House of Commons to institute an annual “Armistice Day” — to be held not on 11 November, but on the second Monday of November each year.

Parliament was still deciding on a date for the commemoration when King George V sent out an appeal to the British Empire on 6 November 1919. He urged that the armistice that ended the fighting be marked by the suspension of all activities, and the observance of two minutes of silence, at exactly 11 a.m. on 11 November — the same day of the year and time the armistice had been signed in 1918. Canadians commemorated Armistice Day on 11 November in 1919 and 1920.

In May 1921, an Act of Canada’s Parliament declared that an annual Armistice Day would be held on the Monday of the week in which 11 November fell. Oddly, the day was joined with the celebration of Thanksgiving Day, a day featuring sports, turkey dinners and light recreation. This anomaly, which confused the public and angered veterans of the First World War, came to an end on 18 March 1931, when MP A.W. Neil introduced a motion to have Armistice Day observed on 11 November and “on no other date.”

Another MP, C.W. Dickie, moved to change the name from Armistice Day to Remembrance Day. This renaming placed the emphasis more upon the soldiers whose deaths were being remembered. Parliament adopted these resolutions as an amendment to the Armistice Day Act, and Canada held its first Remembrance Day by that name on 11 November 1931. The Holidays Act of 1970 and 1985 recognized it as a national holiday.

In France and Belgium, 11 November is still observed as Armistice Day, while in Britain Remembrance Sunday is the second Sunday in November. In the United States, war veterans are also honoured on 11 November, known as Veterans Day.


Did you know?
In Newfoundland and Labrador, the sacrifices of the First World War have traditionally been acknowledged on July 1. The province didn’t join Confederation until 1949 and was a separate Dominion during the First and Second World Wars. The first memorial service was held on 1 July 1917, in honour of the soldiers of the Newfoundland Regiment who had died at the Battle of Beaumont-Hamel. The service soon became a regular event and Commemoration Day (later Memorial Day) was formally instituted in 1920. Both Memorial Day and Remembrance Day are observed in Newfoundland and Labrador.

In Canada, Remembrance Day has proven to be a flexible and enduring term. It has grown to include the remembrance of war dead from the Second World War, the Korean War and the War in Afghanistan, as well as from peacekeeping missions and other international military engagements. In all, more than 1.6 million Canadians have served in Canada’s Armed Forces and more than 118,000 have died in foreign conflicts.

Did You Know?
The phrase “Lest we forget” is often used in remembrance ceremonies to caution against forgetting those who died in war. The line can be traced back to the Bible — as “Lest thou forget” in Deuteronomy 6:12 — but was written in its current form as a refrain in Rudyard Kipling’s poem “Recessional,” written about Queen Victoria’s Diamond Jubilee in 1897. 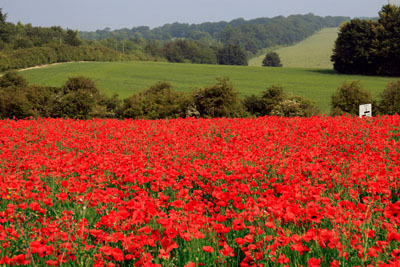 Red Poppies in Flanders today. The poppy became a symbol of Remembrance Day thanks to the famous poem "In Flanders Fields," written by Canadian John McCrae (photo by Joseph Moore).

The first person to use the poppy as a symbol of remembrance was American Moina Michael, who had been inspired by Lieutenant-Colonel John McCrae’s poem “In Flanders Fields.” Michael pledged in 1918 “always to wear a red poppy of Flanders Fields as a sign of remembrance and the emblem of ‘keeping the faith with all who died,’” referencing a line in the poem.

The first “poppy day” in Canada occurred on 11 November 1921. By 1922, lapel-worn poppies were manufactured and distributed by veterans in Canada. The Royal Canadian Legion, formed in 1925, has run the poppy fundraising campaign in Canada ever since.

Did You Know?
The Canadian Poppy Campaign was led by Jewish-Canadian philanthropist Lillian Freiman (née Bilsky). During the First World War, Freiman worked tirelessly to support Canadian soldiers at home and overseas. She organized the Red Cross knitting and sewing club in her home and, in 1917, helped form the Ottawa chapter of the Great War Veterans’ Association of Canada (now the Royal Canadian Legion). Freiman spearheaded the Canadian Poppy Campaign in 1921, gathering women in her home to create cloth poppies. She chaired the campaign from 1921 until her death in 1940. Freiman was the first Jewish Canadian to receive the Order of the British Empire.


Today, millions of Canadians wear the bright red emblem as a symbol of remembrance, leading up to and on 11 November. The Poppy campaign raises funds to support veterans and their families. In 2021, Canada Post issued a stamp celebrating the 100th anniversary of the poppy’s adoption as a national symbol of remembrance.

Some organizations in Canada, including Canadian Voice of Women for Peace (VOW Peace) and the Vancouver-based Peace Poppies, support the wearing of white poppies instead of, or in addition to, the traditional red version. The white poppy represents a commitment to peace and commemorates all victims of war, civilian as well as military. However, white poppies aren’t popular in Canada, as many feel they are disrespectful to veterans.


The poem “For the Fallen” was written by Laurence Binyon in 1914. After it was published, the fourth stanza became known as the “Ode of Remembrance” or the “Act of Remembrance.” Its lines are often engraved on cenotaphs, war memorials and headstones in war cemeteries throughout the English-speaking world.

They shall grow not old, as we that are left grow old:
Age shall not weary them, nor the years condemn;
At the going down of the sun, and in the morning,
We will remember them.

On Remembrance Day, public ceremonies and church services often include the playing of “Last Post” followed by “Reveille,” a reading of the fourth stanza of the poem “For the Fallen,” and two minutes of silence at 11 a.m. Wreaths are laid at local war memorials and assemblies are held in schools.

Did You Know?
“Last Post” was a military bugle call played at the end of the day to signal that sentry posts were manned and ready for the night ahead. In Remembrance Day ceremonies, the “Last Post” symbolizes death. It is followed by two minutes of silence, which are broken by the “Reveille” bugle call. “Reveille” was the first call sounded in the morning and symbolizes resurrection of the spirit of the fallen on Remembrance Day.


The Books of Remembrance, which lie in the Memorial Chamber of the Peace Tower on Parliament Hill in Ottawa are another record of the wars. The eight books contain the names of more than 118,000 Canadians who have died on military service, or in the merchant marine. The various books cover foreign conflicts dating from the War of 1812, the South African War and Nile Expedition, through the world wars and Korea, to the conflicts of the 21st century. A separate Newfoundland Book of Remembrance includes the names of Newfoundlanders who died in the First and Second World Wars, when Newfoundland and Labrador was not yet part of Canada.

Monuments commemorating the lives of Canadians who died in conflicts overseas occupy a prominent place in towns and cities throughout Canada. Most were erected in the 1920s and 1930s following the First World War (the names of subsequent wars were later added to many of these memorials). They represent a commitment, by communities large and small, not to forget Canadian lives lost in war (see Monuments of the First and Second World Wars).

Every year, the Royal Canadian Legion chooses the mother of an Armed Forces member killed in military service to represent the mothers of Canadian veterans. She is named the National Memorial (Silver) Cross Mother, and is invited to attend the national Remembrance Day ceremony in Ottawa.

Canada’s most prominent domestic war monument is the National War Memorial in Ottawa, which is the focus, on 11 November, of a nationally televised Remembrance Day ceremony, traditionally attended by the governor general, the prime minister, senior Legion officials and a large parade of veterans.

The Tomb of the Unknown Soldier is located at the foot of the National War Memorial (see Unknown Soldier). It contains the remains of an unidentified Canadian soldier killed in the First World War. His remains were exhumed from a cemetery near Vimy Ridge and repatriated in 2000. The tomb represents all Canadians killed overseas who lie in unmarked graves.