The Plains Cree and the Plains Ojibwa (Saulteaux) were the first inhabitants in what is now southern Saskatchewan. The millions of buffalo that roamed the southern prairies provided them with food, clothing and the tipi that sheltered them during the harsh winters. The arrival of Europeans in the western interior of North America and the rise of the fur trade introduced blankets and cloth, metal tools, firearms and horses, but also smallpox, measles and influenza. In the 1870s the buffalo virtually disappeared due to over-hunting. (See also Epidemics, Buffalo Hunt.)

In 1869 the Canadian government purchased Rupert’s Land — comprising what are now the three Prairie provinces — from the Hudson’s Bay Company (which had been granted title to this vast area by King Charles II of England in 1670). Two years later the Canadian government began to negotiate a series of treaties. Seven such treaties were signed with Prairie nations during the period 1871 to 1877. The so-called “Numbered Treaties” provided for the surrender of the Aboriginal title in return for cash payments, the creation of reserves and assistance in farming. The Plains Cree and the Plains Ojibwa negotiated and signed Treaty 4 at Fort Qu’Appelle in 1874.

The federal government’s goal with the Numbered Treaties was to be able to encourage settlers from other parts of Canada and Europe to come west, take up land and grow wheat. Few came until the construction of the Canadian Pacific Railway (CPR) got underway in 1881.

Regina was founded in 1882 and made the capital of the North-West Territories in 1883. The town was a creature of the CPR, which determined the location of the town site near the meandering Pile O' Bones (Wascana) Creek, and influenced Regina's street layout and land-use patterns. The North-West Mounted Police chose the town as the site of its headquarters in 1882. Recruit training began three years later.

Regina grew slowly at first, reaching a population of 2,250 by 1901, but thereafter its fortunes improved dramatically. Named provincial capital when Saskatchewan was formed in 1905, Regina grew quickly; and by 1911 numbered over 30,000 inhabitants. The boom mentality of the period survived the destruction wrought by a 1912 tornado, but an economic depression in 1913 and the outbreak of the First World War temporarily halted the city's growth.

Economic conditions remained unsettled after the war. Not until the mid-1920s did prosperity return, as the population leaped from 34,400 to 53,200 in the decade, but then a decade of drought and depression reduced life in Saskatchewan to bare subsistence. When better times returned for the province's farmers after 1939, Regina's economy began to revive as well.

Since the Second World War the city has experienced steady, though unspectacular, growth, with the primary spurt in the 1950s, when the population grew by 57 per cent. An increase in the population of nearly 10 per cent between 1981 and 1991 was the result of a diversifying economy and the movement of people from farms to the city. During the 21st century growth has been considerably slower. 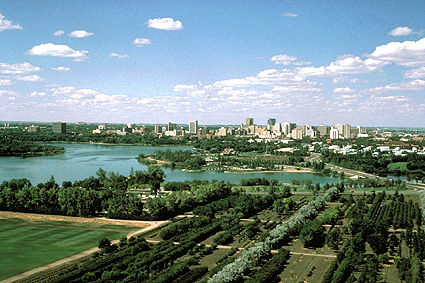 Reginans have transformed the flat and treeless prairie into a city of shaded parks and streets. The 930 hectare (ha) Wascana Centre, surrounding man-made Wascana Lake, is the city’s largest green space. The stately Legislative Building (1912) and other provincial government offices, the Royal Saskatchewan Museum, the Conexus Arts Centre and the Saskatchewan Science Centre are also located there.

Regina Downtown (a business improvement district) is a 40-block area in the city's downtown. The construction of several new high-rise office buildings there over the past 30 years has transformed the city's skyline. Harvard Developments Inc., a Regina firm (founded in 1903), built many of them. One of the oldest buildings in the downtown core, a railway passenger station, is the home of Casino Regina.

Regina’s population has more than doubled since the Second World War, in part through immigration from outside the province, but more from a general population shift from farm to city within Saskatchewan. According to the 2016 census, people citing German ethnic origins make up the largest ethnic group, at 28.1 per cent of the city’s population, followed by English (23 per cent) and Canadian (18.8 per cent). Visible minorities account for 19.2 per cent of city residents, with South Asian, Filipino and Black people comprising the largest communities within this group. Regina is also home to a large number of Indigenous people, at 9.9 per cent of the total population.

Regina is surrounded by rich farmland; the major crops are wheat and canola. The city is the most important retail, distribution and service centre in southern Saskatchewan. It is also the headquarters of Viterra, one of the world’s largest grain handling and marketing firms. The Canadian Western Agribition, the second largest livestock show in North America, and Canada’s Farm Progress Show (an exhibition of dryland farming technology), reinforce Regina’s position as a major centre of Canadian agriculture. In addition, the provincial government continues to be a major employer in the city.

The largest firms in the manufacturing sector are EVRAZ Regina (a steel mill and pipe plant), the Co-op Refinery Complex (a heavy oil upgrader and refinery) and the Brandt Group of Companies (farm and industrial equipment).

Regina is located on the Trans-Canada Highway, on the main line of the Canadian Pacific Railway and a branch line of the Canadian National Railway. The CPR recently moved its freight yards from downtown Regina to the Global Transportation Hub west of the city. Other firms now located in the Hub include the Loblaw Group of Companies, and the Saskatchewan Liquor and Gaming Authority (which operates the province’s network of liquor stores).

The Regina International Airport serves the city and southern Saskatchewan.

Regina is served by a daily newspaper, the Leader-Post, and the biweekly Prairie Dog. A province-wide French weekly newspaper, l'Eau vive, is also published in the city.

Regina is governed by an elected mayor and 10 councillors, each of the latter representing a specific area of the city or ward. Public and separate (Roman Catholic and Francophone) school boards administer Regina's tax-supported elementary and high school systems.

The city's main cultural venue is the Conexus Arts Centre. It is the home of the Regina Symphony Orchestra, one of the city's most distinguished cultural institutions, Opera Saskatchewan and the contemporary-dance company, New Dance Horizons. The MacKenzie Art Gallery and the Dunlop Art Gallery have substantial permanent collections and feature many travelling exhibitions. The Globe Theatre has gained a national reputation for its professional theatre productions. In addition to the Royal Saskatchewan Museum, other museums include the Royal Canadian Mounted Police training academy (Depot Division) and Centennial Museum (which attract tens of thousands of visitors each year).

The pride of the city, and indeed of the whole province, is the Saskatchewan Roughriders, a Canadian Football League team that plays at Mosaic Stadium. As well, there is a junior hockey team, the Regina Pats.