Prime Minister Pierre Trudeau speaks for the federalist side, during the campaign for the 1980 Quebec Referendum on sovereignty.

A referendum is the asking of a political question to an electorate, for direct decision by general vote. If the decision is not binding on a government, it is more correctly called a plebiscite. Although federal referendums are rare in Canada, there have been numerous provincial referendums and plebiscites since Confederation. The most famous, and potentially momentous, were the Québec sovereignty referendums in 1980 and 1995.

The word referendum comes from the Latin, ad referendum, which means "that which must be taken back" or "that which must be submitted to an assembly." Its roots lie in ancient Rome around the fourth century BCE, where certain laws were enacted by vote of the common people or plebians ("plebiscite"). The terms referendum and plebiscite are commonly used interchangeably, but plebiscite specifically means a vote that is advisory or consultative, rather than legally binding on the government.

Referendums do not easily fit in with the traditions of British parliamentary practice (in which Parliament decides most political questions). Referendums are inherently polarizing, even impassioning processes and thus are risky undertakings for governments. However, many believe a referendum is a useful and inherently democratic device that elicits from the electorate a precise answer to a specific question. Referendums have taken place since the 16th century in Switzerland. In France and other European countries, the practice was used in the 18th century but did not spread widely until the second half of the 20th century. In Australia, they are used for constitutional amendments, and some American state and local governments use them for policy and constitutional issues.

As the Canadian experience demonstrates, referendums and plebiscites may be constitutional (dealing with constitutional change) or simply legislative (dealing with ordinary laws or legislation), and they may be initiated either by the government or by the people. The latter usually take place at the local or provincial rather than national level.

In Canada, the federal government has held three referendums (or, more strictly, plebiscites). The first was in 1898 on the issue of Prohibition; only 44 per cent of the electorate voted, with 51 per cent voting Yes for a prohibition on alcohol and 49 per cent voting No. Ultimately, the government of Prime Minister Wilfrid Laurier decided that the majority of more than 13,000 Yes votes was not large enough to warrant passing a law, especially since Québec had voted overwhelmingly against Prohibition.

The second federal referendum was on conscription in 1942. The Liberal government of Prime Minister William Lyon Mackenzie King asked Canadians if they were in favour of releasing the government from its promise not to use conscripts for overseas military service in the Second World War. More than 60 per cent of the voters replied Yes; the others, No. In Québec, however, about 72 per cent voted No.

A third federal referendum was held in 1992 on the Charlottetown Accord. In negotiations leading to the constitutional Accord, several provinces had made arrangements to put any new deal to a provincial referendum. In Québec, the government had threatened to hold a referendum on sovereignty by October that year if an acceptable deal was not forthcoming from the rest of Canada. Thus the referendum had become a strategic tool in the negotiations. After a new agreement was reached by the provinces and the federal government in September, Prime Minister Brian Mulroney announced that a national referendum would be held on 26 October. Seventy-five per cent of eligible voters went to the polls. The Accord was rejected by voters in six provinces (Nova Scotia, British Columbia, Alberta, Saskatchewan, Québec and Manitoba) and one territory (Yukon). The overall vote nationally was 44.8 per cent in favour and 54.2 per cent against.

In 1948, two important constitutional referendums in Newfoundland were held on the issue of union with Canada. The first failed to give an absolute majority to any of the three options: confederation with Canada, responsible government as it existed in 1933 (in which Newfoundland would continue as a separate state), or Commission government for five years (under British rule). But a second vote, held a month later on 2 July, resulted in a slim majority of 52.3 per cent in favour of confederation. (See Newfoundland and Confederation.)

Nearly half a century later, in 1996, a Newfoundland plebiscite was held on the question of seeking an amendment to the Canadian Constitution, to alter denominational religious education rights. A majority voted Yes.

All the provinces except New Brunswick have held non-constitutional referendums dealing with such matters as the prohibition of liquor and related issues, switching to daylight-saving time, votes for women, public health, ownership of electric companies, grain marketing, and proportional representational electoral systems.

In January 1988, voters in Prince Edward Island were asked whether the province should have a fixed link to the mainland. More than 59 per cent of PEI voters said Yes, leading to the construction of the Confederation Bridge. 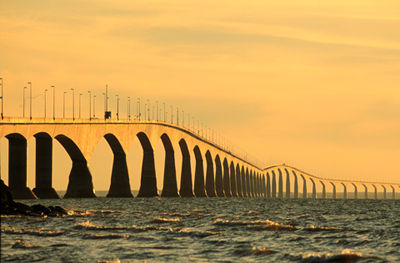 The Confederation Bridge, opened in 1997, linking Prince Edward Island to the Canadian mainland.

Since Confederation, there have been more than 50 provincial referendums and plebiscites. All four western provinces have enacted statutes making possible the use of Popular Initiative (the creation or amendment of laws via public petition or other populist means).

Provincial referendums in Canada are traditionally consultative or advisory in nature (i.e., plebiscites), although some have been treated as though they were binding by the governments that have called them. Several provinces, such as British Columbia and Saskatchewan, have laws requiring their governments to hold binding referendums on questions of constitutional change.

The two provincial referendums on Québec independence were the most famous and scrutinized referendums in Canada. In the first, held on 20 May 1980, 60 per cent of Québec voters refused to give the government a mandate to negotiate sovereignty-association with the rest of Canada. The second, held on 30 October 1995, asked voters whether they agreed "that Québec should become sovereign after having made a formal offer to Canada for a new economic and political partnership." The result was the narrowest of victories for the federalist side, with 50.6 per cent voting No and 49.4 per cent voting Yes.