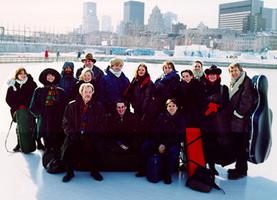 Sound recordings were first manufactured in Canada in 1900 by the Berliner Gramophone Company in Montréal, from masters recorded by the company's European and US companies. Before 1960 the majority of recordings sold in Canada were of non-Canadian performers; however, a steady growth in the production and sale of records by Canadians resulted from the worldwide boom in the record industry as popular music became a major cultural force in the late 1960s. This trend was augmented by a radio broadcast ruling implemented in 1970 by the CRTC (now the CANADIAN RADIO-TELEVISION AND TELECOMMUNICATIONS COMMISSION), which required that AM broadcasters play a minimum of 30% Canadian material in a week. As of 1998, the majority of commercial radio stations are required to play 35% Canadian content.

To qualify as "Can con" (Canadian content), a recording must be Canadian in 2 of the 4 following criteria: music, artist, production or lyrics (known as the MAPL code). While there were many attempts to start Canadian-owned record companies during the 1960s, few survived prior to the implementation of the "Can con" rulings.

Because of the limited size of the domestic market, Canadian companies depend on foreign income for a significant portion of their earnings. In general, inadequate access to investment capital, rapidly escalating costs owing to new technology, private copying and the lack of a strong Canadian distribution system are the primary causes for the market imbalance and the slow pace at which the market share for independents is increasing.

Figures compiled for 1998 indicate that the recording industry accounts for roughly 16 000 full-time jobs in Canada, including 30% in retail, 25% in production and the remaining 45% employed at labels, manufacturing facilities, studios, in the concert industry, in industry trade associations and in other occupations related to the industry, eg, managers, producers, lawyers and graphic artists. In addition, the industry supports thousands of composers, lyricists and musicians.

The Canadian Broadcasting Corporation has played an important role in recording Canadian classical artists and compositions. The first album was issued in 1945, but it was not until the early 1970s, when it became clear that the CBC's listeners were anxious to hear more of the performances that were available on radio and TV, that they offered records for sale to the public. Within 10 years, the Canadian Broadcasting Corporation has become the largest manufacturer and distributor of Canadian classical recordings.

In Canada, the performer is paid in the form of royalties on records sold. Publishers and composers are paid from "mechanical" royalties, an industry-negotiated fee paid for each record manufactured. Mechanical royalties are collected on behalf of composers and their publishers by the Canadian Mechanical Reproduction Rights Agency (CMRRA) and the Société du droit de reproduction des auteurs, compositeurs et éditeurs du Canada (SODRAC). Performance royalties are paid to composers and publishers for the use of the music for public broadcast purposes, such as radio or television broadcasts and are collected and disbursed by the Society of Authors, Composers and Music Publishers of Canada (SOCAN). The Neighbouring Rights Collective of Canada (NRCC) collects on the behalf of performing artists and record companies. The entire payment scheme is dictated by the Copyright Act of Canada and by negotiated agreements between rights holders and record companies.

Trade associations are active in the recording industry. The multinationals are represented by the Canadian Recording Industry Association (CRIA); the independent sector by the Canadian Independent Record Production Association (CIRPA) and the Association du disque et de l'industrie du spectacle québécois (ADISQ); and publishers by the Canadian Music Publishers Association (CMPA). These associations deal with industry-wide issues, including responding to home taping, which drains estimated millions from the industry each year; encouraging private-sector investment; creating a viable government cultural and economic policy; and understanding and adapting to new technologies such as compact disc (CD), digital audio tape (DAT), music videos, and all the new forms of distribution by fibre optics cable and direct satellite to home systems.

The JUNO AWARDS (established 1964) are the awards presented annually by the Canadian Academy of Recording Arts and Sciences (CARAS). There are a variety of categories in the fields of performance, production and composition, and awards are made on the basis of record sales over a specific period. ADISQ introduced its own awards in 1979 called the Felix Awards.