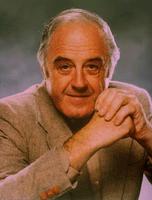 A true chansonnier of the Parisian type, he combined song, comedy and political satire.

Raymond Lévesque, singer-songwriter, poet, actor (b at Montréal 7 Oct 1928). A true chansonnier of the Parisian-inspired style that combines song, comedy and political satire. Lévesque never really achieved stardom himself, but he opened the way for the dynamic wave of Québec CHANSONNIERS during the 1960s. He studied piano with Rodolphe MATHIEU, drama with Mrs Jean-Louis Audet and began composing songs in 1943. During the 1950s he spent 5 years in Paris, where he sang in cabarets and on radio, also recording for Barclay, touring France (with Annie Cordy) and befriending Brassens, Devos and Gréco. Eddy Constantine recorded his song Les Trottoirs in 1954, while Bourvil popularized his La Vénus à Mimile. In 1956 he wrote his greatest success - Quand les hommes vivront d'amour - one of the first "classics" of the Québécois chanson. It has since been performed and recorded numerous times by prominent artists in France and in Québec. Among his other songs are Le Coeur du Bon Dieu and Rosemont sous la pluie.

Lévesque returned to Montréal in 1959 and cofounded the group Les Bozos with other chansonniers. He also became actively involved in the Québec separatist movement. Until the mid-1980s, when he became afflicted with deafness, he sang in various clubs, acted on stage and on television, directed numerous summer revues and was a featured performer in several variety shows. Lévesque received the "Témoignage de l'ADISQ" award in 1980.