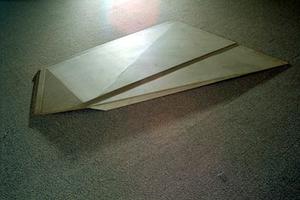 Seven Left Limits Added to a Piecewise Linear Developed Four Manifold, steel, sandblasted and oiled, 1976, by Royden Rabinowitch (courtesy National Gallery of Canada/Musée des Beaux-Arts du Canada, Ottawa).
Royden Rabinowitch, sculptor (b at Toronto 6 Mar 1943). One of Canada's truly original contributors to modern SCULPTURE, he began his career in London, Ontario, during the 1960s (as did his twin brother David RABINOWITCH) and moved to New York in the 1970s. He has exhibited widely, especially in Europe. Although Rabinowitch's early work showed characteristics of minimalism, his sculpture is also a critique of it - as it is of most other nonfigurative sculpture (which he contends has been based on assumptions about space that are too mechanical, abstract and visual). Typical of his style is the group of works titled "Handed, Limited and Numbered Manifolds" - low, ground-hugging constructions, each composed of a single polygonal steel plate bent to form a series of angled planes (the manifold), on top of which, aligned with the edges, are other steel plates (the limits) on the right or left, depending on whether the individual sculptures are left- or right-handed. Although purely abstract, the sculptures evince the principal properties of the human body that apply to its orientation in space.

Royden Rabinowitch lives in Ghent, Belgium, and has had an exceptional exhibition record in Europe, including one-man shows at the Kunstmuseum, Bern (1990), and the Gemeentemuseum, Den Haag (1992). In 2003 he was made an Officer of the ORDER OF CANADA and in 2012 was selected to receive a Governor General's Award for Visual and Media Arts.