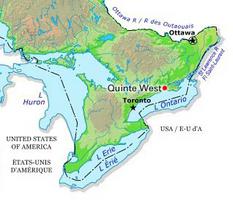 Quinte West, Ontario, incorporated as a city in 1998, population 43 086 (2011c), 42 697 (2006c). The City of Quinte West is located at the western end of Lake Ontario's Bay of Quinte, 170 km east of Toronto. A municipal restructuring amalgamated the former city of Trenton, the village of Frankford and the townships of Sidney and Murray into the new city of Quinte West. The amalgamation attempted to maintain and enhance the essential character and interests, as well as the long-standing social and economic relationships, of the urban centres and rural communities involved. In addition to cost reduction, the amalgamation provided land and infrastructure for future growth and development of the city.

Long occupied by Indigenous peoples, at the time of first European contact, the Mississauga (Ojibwa) occupied the region. Explored early in the 17th century by the French, European settlement commenced with the arrival of the Loyalists in the 1780s and expanded with the establishment of an agricultural economy based upon wheat and livestock. In the late 1800s, dairying and orchards became important specialties. An important lumbering industry was sustained by timber moving from the back country to the Bay of Quinte along the Trent and Moira rivers.

An important element of the region's development has been the Trent-Severn Waterway from Trenton on the Bay of Quinte to Port Severn on Georgian Bay. Initiated in 1833 and completed in 1920, the Trent Canal was initially conceived of as an important west-east transport route and is now a major tourist attraction and recreational facility.

During World War II, a major airfield was developed at Trenton for the Royal Canadian Air Force and it became a major training base for the British Commonwealth Air Training Plan. The base is host to a major RCAF museum and continues to be the region's major single employer. Quinte West's diverse economic base includes textiles, electronic components, food products, telecommunications and agriculture.