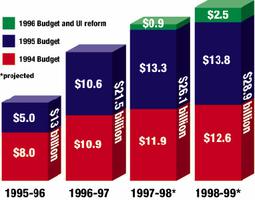 Ottawa has added cuts each year as the cumulative savings increase, in billions (courtesy Maclean's).

The relative prices of the goods and services that government purchases must also be taken into account. In real terms, the relative expansion of government spending as a proportion of GDP from 1947 to 1995 was 44%, not 114%. Since 1970 the proportion of real goods and services produced in the economy that is used by the government sector in the course of its activities has actually declined by about 17%. In contrast, the share of transfer payments in real GDP roughly doubled during this period. This is largely because of a significant liberalization of child benefits and unemployment insurance.

The decline in federal defence spending freed resources that financed the expanding provincial and local health and education sectors. At the same time, programs such as OLD-AGE PENSION, FAMILY ALLOWANCES and UNEMPLOYMENT INSURANCE were financed by a considerable increase in taxes. Yet these programs appear to have redistributed income among Canadians only slightly because so many of the taxes were paid by the same broad groups that received the transfers.