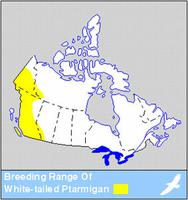 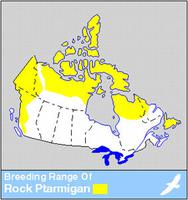 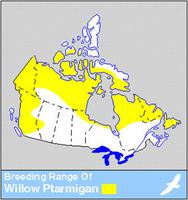 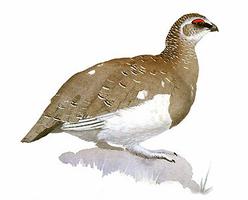 Shown here in its summer plumage, the rock ptarmigan, as with other ptarmigans, has white winter plumage (Macmillan Illustrated Animal Encyclopedia).
PreviousNext

Ptarmigan are distinguished from other members of the grouse subfamily by their all-white wings. Like other grouse, they are well adapted to cold environments, eg, nostrils are hidden by feathers, body feathers have a long, downy aftershaft that increases insulation, and toes are feathered. Ptarmigan are the only birds with snow-white winter plumage. Summer plumage is mottled brown.

Willow ptarmigan (Lagopus lagopus) and rock ptarmigan (L. mutus) are the only grouse native to both Old and New Worlds. Willow ptarmigan has circumpolar distribution. In Canada, it occupies higher western mountain elevations and tundra habitats as far north as Melville Island. Rock ptarmigan, the most northern grouse, prefer habitats higher and drier than those of willow ptarmigan. Both are strong fliers but rock ptarmigan are more migratory, moving from high latitudes to escape the dark arctic winter.

White-tailed ptarmigan (L. leucurus), the smallest grouse, lacks the black tail common to the other two. It is found only in North America, occupying windswept upper slopes of the western mountains year-round. Its high-pitched, cackling scream contrasts with guttural calls of the others.

All ptarmigan nest on the ground, laying 6-10 cryptically marked eggs. Incubation is by females; males frequently abandon their territories at this time. Male willow ptarmigan usually remain and may assist in raising chicks, a trait not found in most grouse. Ptarmigan are important game birds. 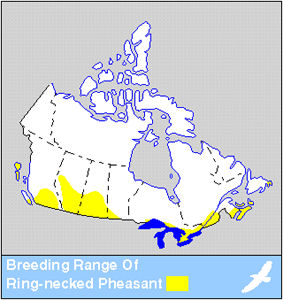