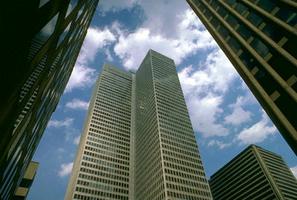 Place Ville Marie, Montréal (architects I.M. Pei, with Ray AFFLECK, 1958-65), was developed as an entire city block by CN Real Estate. It was a phased development. The first to be constructed (1958-63) was the cruciform (cross-shaped) 45-storey tower, commonly called the Royal Bank Building; its grand plaza and lower office buildings, designed by internationally famous US architect I.M. Pei, helped to set new standards for architecture in Canada in the 1960s. It confirmed for Montréal the importance of the below-ground pedestrian walkway system (which had its origins in CN's Central Station). Phase II, consisting of 3 smaller structures, dates 1963-65. Shops, restaurants and cinemas are located below the plaza, and are reached by generous square wells providing daylight as well as access. The tower's smooth aluminum and glass surface and crisp unadorned geometric form demonstrate Pei's adherence to the mainstream of 20th-century modern design.